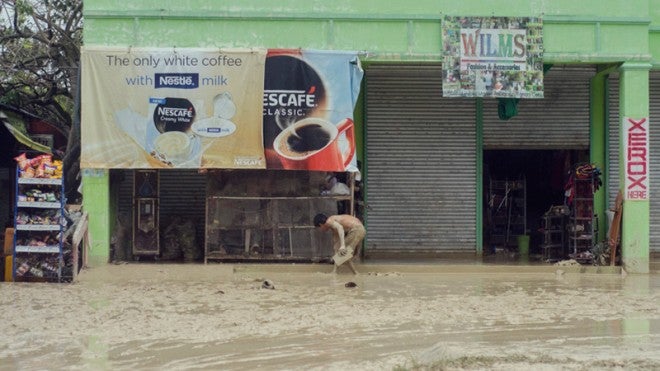 CEBU CITY, Philippines—Tropical Storm “Seniang” triggered floods and landslides in a two-day sweep across Mindanao and the Visayas, leaving at least 31 people dead, seven missing and more than 40,000 in evacuation centers.

Packing peak winds of 65 kilometers per hour, the storm, internationally called Jang-mi, toppled electric posts and washed away houses as it slammed into Surigao del Sur province on Monday and barreled west toward Palawan province, where it was expected Wednesday.

“The rains were really strong and people thought the storm won’t be too strong based on the news,” Tan said. “Rescuers reported hearing voices from the rubble,” she said. Tan feared that the toll of lives could still rise.

According to the Associated Press, flash floods and landslides triggered by Seniang left at least 31 people dead and seven missing, including in areas still recovering from last year’s Supertyphoon “Yolanda” (international name: Haiyan).

Inquirer bureaus reported 8 deaths in Rondo town in Cebu province; 5 in Tanauan and 4 in Mahaplag, both in Leyte province; 4 in Loon and Baclayon in Bohol province; 1 each in Tobias Fornier in Antique province and San Francisco in Cebu and 1 in Butuan City. Two fatalities were earlier reported in Monkayo, Compostela Valley, and in Compostela town.

However, the National Disaster Risk Reduction and Management Council put the death toll at only 21, its executive director, Alexander Palma, said.

At least 19 others were reported missing as of Tuesday afternoon, including a pump boat that disappeared en route from Barangay San Roque in the Southern Leyte coastal town of Macrohon to Limasawa.

The Coast Guard said nearly 15,600 passengers were stranded in various ports in the Visayas, Mindanao and the southern Luzon region.

The Department of Social Welfare and Development (DSWD) said 44,399 people in 10,232 families fled to 195 evacuation centers in the Caraga region as of Tuesday.

This is aside from P35 million in standby funds that the DSWD field office in the Caraga region has prepared for the purchase of emergency relief resources, and P16 million worth of pre-positioned food packs waiting to be delivered to local government units (LGUs) in need.

“We have instructed quick response teams in field offices along the typhoon’s path to remain on alert status and to coordinate with LGUs so that needed assistance will be provided to survivors,” Soliman added.

The National Electrification Administration (NEA) said Seniang damaged transmission facilities of the National Grid Corp. of the Philippines (NGCP), causing outages in Central and Eastern Visayas and the Caraga region. Some electricity cooperatives suspended services as a preventive measure.

A few lines were reenergized on Tuesday but it may take another day or so for power in other areas to be restored, NEA Administrator Editha S. Bueno said. Some of the 138 kilovolts and 69 kV transmission lines of NGCP serving electricity cooperatives and director customers were affected.

In some instances, power distributors may have suspended power services in flooded or disaster-prone parts of their respective franchise areas to prevent accidents such as electrocution or further damage to facilities, the NEA said.

In Rondo town in Cebu, floodwaters from the mountains swept houses away, killing eight from three families, Mayor Mariano Blanco III told radio station dyAB. Nine others remained missing as of Tuesday noon. All the victims came from the villages of Liboo, Poblacion and Tupaz.

“It was not the river that overflowed. It was water coming from the mountains that found its way to the road and flooded it,” Blanco said in the radio interview.

Blanco said the Bahinting family members were staying at the second floor of their house when the ground floor collapsed and swept the entire family taking shelter.

In Tanauan town in Leyte, five people died due to a landslide in Sitio (settlement) Haclagon of Barangay Cabuynan: Glen Custodio, his wife Merly and their children Joy, Mary and Jimmy. Their house, made of light materials, was buried early morning by mud and boulders falling from a nearby mountain, said Tanauan Mayor Pelagio Tecson.

A family of four was buried alive inside their house in Barangay Cagan in Mahaplag town, also in Leyte. They were Roberto Gopol, his wife Lita and children Lilad and Linda. Their son Roberto Jr. was injured.

In Tobias Fornier town in Antique, Herman Atay, a crew member of a barge, drowned and 16 others were rescued after it drifted and ran aground off the coast of Barangay Balud early Tuesday morning.

The Philippine National Police in Central Visayas reported that a fisherman, identified as Montalban Austria, died in San Francisco town in Camotes Island in Cebu.

In Loon town in Bohol, two boys, identified as Archie Cambanay, 16, and Arjay Brendes, 15, were electrocuted. In Baclayon town, also in Bohol, Paula Upay, 60, drowned while Carlo Dapiton died after he was hit by a coconut tree in Alicia town.

In Butuan, a 10-year-old girl, Rhea Mae Almodel, died in a landslide.

In Borongan City in Eastern Samar, a tornado swept the villages of Songko and Balud which damaged several houses and injured three persons.