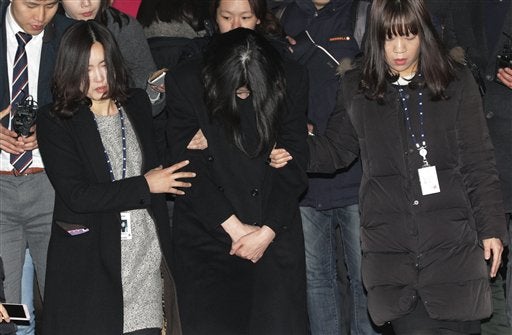 Cho Hyun-ah, center, the former vice president of Korean Air, leaves for the prison at the Seoul Western District Prosecutors Office in Seoul, South Korea, Tuesday, Dec. 30, 2014. A South Korean court has approved the arrest of a former Korean Air Lines Co. executive who delayed a flight in what has widely been called “nut rage.” (AP Photo/Ahn Young-joon)

A Seoul court issued an arrest warrant Tuesday for Korean Air Lines heiress Cho Hyun-ah, who delayed a flight with a tantrum over snacks in a “nut rage” incident that caused a national uproar.

The eldest daughter of the top Korean airline’s chairman Cho Yang-ho faces charges including violation of the aviation safety law, coercion and interference in the execution of duty.

She resigned as the airline’s vice president for cabin service four days after a national uproar over her conduct aboard a Seoul-bound Korean Air flight from New York on Dec. 5.

The plane had already been taxing when she ordered the chief flight attendant to deplane over the way she was served macadamia nuts — in an unopened pack instead of on a plate.

Cho said the crew did not follow the proper procedure for serving nuts to first-class passengers.

The flight was subsequently returned to the gate to deplane the purser, causing an 11-minute delay in its arrival at Seoul’s main gateway, Incheon International Airport. More than 250 passengers were on board.

The court also issued an arrest warrant for a company executive on charges of ordering employees to delete an initial report of the incident.