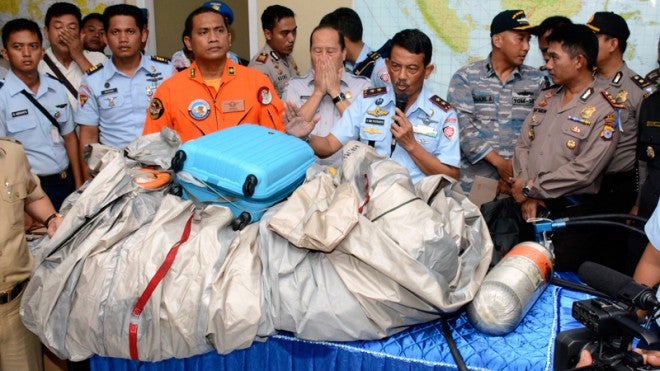 Commander of Indonesian Air Force 1st Operational Command Rear Marshall Dwi Putranto, center, shows the airplane parts and a suitcase found floating on the water near the site where AirAsia Flight 8501 disappeared, during a press conference at the airbase in Pangkalan Bun, Central Borneo, Indonesia, Tuesday, Dec. 30, 2014. Bodies and debris seen floating in Indonesian waters Tuesday, painfully ended the mystery of AirAsia Flight 8501, which crashed into the Java Sea and was lost to searchers for more than two days. AP PHOTO/DEWI NURCAHYANI

PANGKALAN BUN, Indonesia—Family members of those aboard AirAsia Flight 8501 collapsed in agony Tuesday as images of debris and a bloated body flashed across Indonesian television screens, proof that the plane crashed into the sea two days earlier with 162 people on board.

The low-cost carrier vanished Sunday halfway through a two-hour flight between Surabaya, Indonesia; and Singapore after encountering storm clouds, sparking an international hunt with dozens of planes, ships and helicopters.

On the third day of searching, the first signs of the jet were found in shallow, aqua waters only about 10 miles (16 kilometers) from the plane’s last known coordinates: A life jacket, an emergency exit door. Parts of the jetliner’s interior, including an oxygen tank, were brought to the nearest town, Pangkalan Bun. Another find included a bright blue plastic suitcase, completely unscratched.

“I know the plane has crashed, but I cannot believe my brother and his family are dead,” said Ifan Joko, who lost seven relatives, three of them children, as they traveled to Singapore to ring in the New Year. “… We still pray they are alive.”

Indonesia’s National Search and Rescue Agency chief said, however, that just three bodies had been recovered so far, after another official said 40 had been found.

“Today we evacuated three bodies and they are now in the warship Bung Tomo,” Bambang Soelistyo told a news conference in Jakarta, adding that they were two females and one male.

Navy spokesman Manahan Simorangkir told AFP earlier that according to naval radio a warship had recovered more than 40 bodies from the sea. But he later said that report was a miscommunication by his staff.

Rescue workers were lowered on ropes from a hovering helicopter to retrieve bodies. Efforts were hindered by 2-meter-high (6-foot) waves and strong winds, National Search and Rescue Director SB Supriyadi said, but the first body was later picked up by a navy ship. Officials said as many as six others followed, but they disagreed about the exact number. 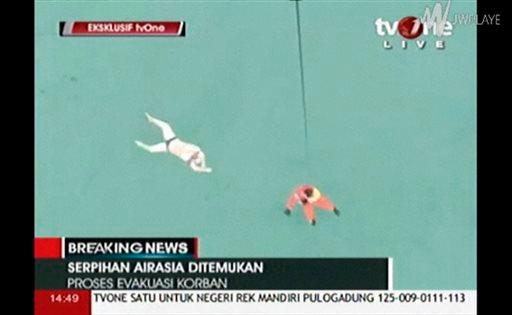 In this image taken from video released by TV One, a rescuer is lowered on rope from a hovering helicopter near a body in Java Sea waters, Indonesia Tuesday, Dec. 30, 2014. Indonesian officials on Tuesday spotted six bodies from the AirAsia flight that disappeared two days earlier, and recovered three of them, in a painful end to the aviation mystery off the coast of Borneo island. (AP Photo/TV One via AP Video) TV OUT

Supriyadi was on the aircraft and saw what appeared to be more wreckage under the water, which was clear and a relatively shallow 20 to 30 meters (65 to 100 feet).

Television coverage of the discovery sent a spasm of pain through the room at the Surabaya airport where relatives were waiting for news, especially as it showed a half-naked man floating in the water, a shirt partially covering his head.

Many screamed and wailed uncontrollably, breaking down into tears while they squeezed each other. One middle-aged man collapsed and had to be carried out on a stretcher.

Their horror at the news was captured by cameras on the other side of windows into the waiting room. To grant traumatized family members privacy, officials blacked out the glass later Tuesday evening.

Around 125 family members were planning to travel to Pangkalan Bun on Wednesday to start identifying their loved ones. Body bags and coffins have been prepared at hospitals there, while dozens of elite military divers will join the massive search. They are desperate to scour the water ahead of approaching rough weather.

Nearly all the passengers and crew were Indonesians, who are frequent visitors to Singapore, particularly on holidays.

Haidar Fauzie, 60, said his youngest child and only daughter, Khairunnisa Haidar, was a stewardess who had worked with AirAsia for two years.

On learning about the crash, he struggled to console his grieving wife. They last saw their child six weeks ago, when she returned home on holiday.

“From the start, we already knew the risks associated with being a stewardess,” said Fauzie. “She is beautiful and smart. It has always been her dream to fly. We couldn’t have stopped her.”

Before flying to Surabaya to pay his respects to the families, AirAsia group CEO Tony Fernandes tweeted, “My heart is filled with sadness for all the families involved in QZ 8501. On behalf of AirAsia my condolences to all. Words cannot express how sorry I am.”

Fernandes, the founder and the face of AirAsia, and a constant presence in Indonesia since the tragedy started unfolding, said he planned to travel to the recovery site on Wednesday.

“I have apologized profusely for what they are going through,” he said of his contact with relatives. “I am the leader of this company, and I have to take responsibility. That is why I’m here. I’m not running away from my obligations.”

It is not clear what brought the plane down.

The last communication indicated the pilots were worried about bad weather. They sought permission to climb above threatening clouds, but were denied due to heavy air traffic. Four minutes later, the jet disappeared from the radar without issuing a distress signal.

The plane’s cockpit voice and flight data recorders, or black boxes, have yet to be recovered. Scott Hamilton, managing director of aviation consultancy Leeham Co., said in a post on his website that autopsies may provide some of the earliest clues about what happened.

Several countries rushed to Indonesia to help with search and recovery efforts.

The United States said it was sending the USS Sampson destroyer, joining at least 30 ships, 15 aircraft and seven helicopters in the search for the jet, said Indonesia’s Search and Rescue Agency chief Henry Bambang Soelistyo.

A Chinese frigate also was on the way, while Singapore said it was sending two underwater beacon detectors to try to detect pings from the plane’s all-important cockpit voice and flight data recorders. Malaysia, Australia and Thailand also are involved in the search.–With AFP