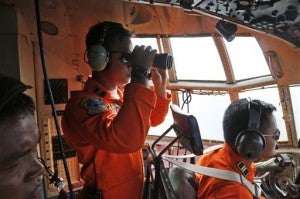 A crew of an Indonesian Air Force C-130 airplane of the 31st Air Squadron uses a binocular to scan the horizon during a search operation for the missing AirAsia flight 8501 jetliner over the waters of Karimata Strait in Indonesia, Monday, Dec. 29, 2014. Search planes and ships from several countries on Monday were scouring Indonesian waters over which an AirAsia jet disappeared, more than a day into the region’s latest aviation mystery. AirAsia Flight 8501 vanished Sunday in airspace thick with storm clouds on its way from Surabaya, Indonesia, to Singapore. (AP Photo/Dita Alangkara)

“For the time being it can be confirmed that it’s the AirAsia plane and the transport minister will depart soon to Pangkalan Bun,” Djoko Murjatmodjo said.

“Based on the observation by search and rescue personnel, significant things have been found such as a passenger door and cargo door. It’s in the sea, 100 miles (160 kilometres) southwest of Pangkalan Bun,” he said, referring to the town in Central Kalimantan, on the island of Borneo.

Indonesian aerial searchers earlier Tuesday spotted items resembling an emergency slide and plane door in the sea as they hunted for traces of the AirAsia plane which disappeared Sunday in a storm over the Java Sea with 162 people on board.