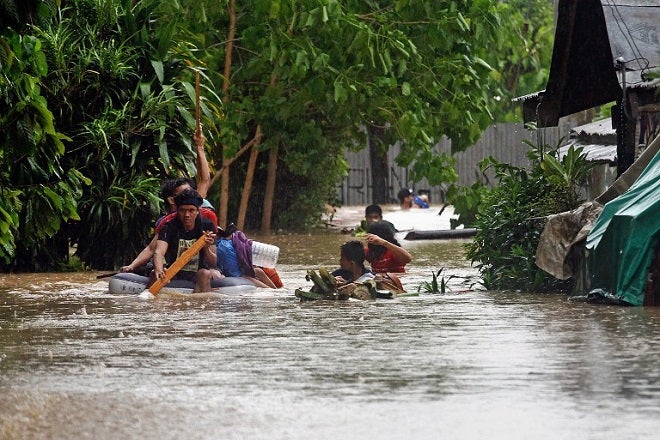 Residents help each other out from their inundated neighborhoods after rains spawned by a tropical storm, locally known as Seniang, caused flooding in Misamis Oriental on the southern Philippine island of Mindanao on December 29, 2014. AFP

MANILA, Philippines — Seniang, which was forecast to bring up to 15 millimeters (0.6 inches) of rain per hour, barreled through fishing and tourist areas on Tuesday, with about 1,700 people being evacuated ahead of its arrival.

“We are focused on floods and landslides because, while the storm’s winds are weak, it will bring heavy rain,” national civil defense chief Alexander Pama told DZMM radio.

An eight-year-old girl drowned after raging floodwaters washed away her family’s shanty home in the coastal town of Ronda in Cebu province, regional civil defense officer Allen Cabaron told AFP, adding that six of the girl’s housemates are missing.

Rivers burst their banks, covering roads and highways in knee-deep floods that washed out bridges and stalled vehicles, Cabaron said, adding that floods in some areas were “neck-deep.”

The deluge was expected to subside in Cebu and Bohol later Tuesday, but flooding was possible on Negros island further west, which is in the storm’s path, he said.

On Monday, at least three people were killed after Seniang slammed into the country’s mountainous southeastern region, triggering floods and landslides.

Up to 14,000 people evacuated in Surigao del Sur, where Seniang first hit on Monday, will be sent home on Tuesday as floodwaters recede, Governor Johnny Pimentel told AFP.

Ten flights to and from the affected areas on Tuesday were cancelled, the Manila airport authority said in a statement.

Seniang will be out of the central region after midnight Wednesday before brushing the southern tip of Palawan island on its way out of the country on Thursday, according to the state-run weather bureau.

The Philippines is battered by about 20 storms every year, many of them deadly.

Last year Super Typhoon Haiyan, the strongest ever to hit the country, left 7,350 people dead or missing in the same region as it stirred up tsunami-like waves, wiping out entire towns.