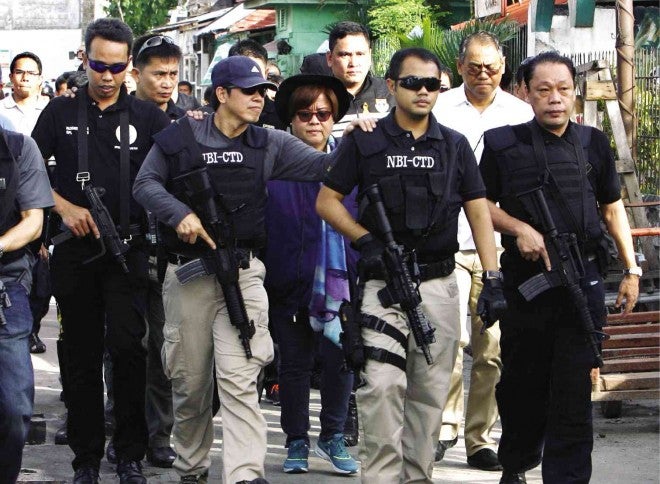 MAN-TO-MAN GUARDING NBI agents provide a human shield for Justice Secretary Leila de Lima (center), as she leads the second inspection of New Bilibid Prison on Thursday. The Justice chief ordered the demolition of the luxurious quarters of drug lords and gang members at the maximum security compound after an initial inspection on Monday uncovered drugs, sex toys and assorted contraband in cells renovated into luxe quarters. RAFFY LERMA

This was the order from President Benigno Aquino III following the discovery of firearms and high-end equipment and appliances in the luxurious detention cells of convicted drug criminals during a surprise raid on the facility on Monday, according to Justice Secretary Leila de Lima.

De Lima returned to the NBP maximum-security compound early Friday, at the head of a group of heavily armed National Bureau of Investigation agents and her own security people to personally check if her order to dismantle and destroy all signs of luxurious living by high-profile inmates had been carried out.

“The President’s instruction to me was to reclaim NBP from drug lords and this operation will not stop until we are sure that we have broken down the illegal activities inside NBP to pave the way for real reforms that would benefit all inmates,” she said.

De Lima said she was “generally satisfied” with the dismantling operations being conducted by the NBP management following her inspection of the quarters of inmates Peter Co, Jojo Baligad, Herbert Colangco, Imam Boratong and Tony Co.

Twenty inmates, all convicted drug criminals, were transferred from the national penitentiary to the NBI after Monday’s raid.

However, inmates like Bobby de la Cruz who has been serving out a murder sentence since 1997 are dismayed by the raid and the resulting removal of the 20 high-profile inmates from the maximum-security compound.

“We are saddened by their transfer because they are good to us. They share with us what they have, like delicious food, and provide us money for medicine,” De la Cruz said.

More prohibited materials were found in the quarters of other prison VIPs, including a pitbull, ketamine, wide-screen television sets and drug paraphernalia, during the raid on Friday.

Unlike the first raid on Monday where bundles of money were found in the quarters of the high-profile inmates, no money was found in Friday’s raid.

De Lima said there would be no letup in the operation to clean up the prison compound.

After the inspection, De Lima had a closed-door meeting with the gang leaders at the maximum-security compound, Commando Gang leaders JB Sebastian and Oliver Soliva of Batang City Jail.

De Lima earlier said the prison gangs at NBP provided protection to the high-profile drug convicts. She said gang leaders would conduct biddings to vie to be the protector of a new inmate, particularly those convicted for illegal drugs.

De Lima asked for the cooperation of the leaders to ensure that no untoward incident would happen because of the removal of the high-profile inmates and the dismantling of the VIP prisoners’ luxurious quarters.

She also told the gang leaders to voluntarily surrender all contraband in their possession. They have been given until Christmas Eve to comply.

During the meeting, Sebastian expressed apprehension about his safety and that of his family because he was suspected by the group of Herbert Colangco as the source of information about the illegal activities in the NBP compound.

Colangco, a convicted bank robbery gang leader, was among those moved from the NBP compound and transferred to the NBI detention facility in Manila.

Sebastian and Colangco, who command followers inside NBP, allegedly provide muscle to the Chinese drug convicts.

“They are competitors and both control large numbers of followers,” a prisoner said.

Bureau of Corrections chief Franklin Bucayu has denied that Colangco, a self-styled concert artist, was able to leave the NBP premises on Sept. 14 to perform at the Solaire hotel.

Posters announcing Colangco’s concert at the hotel were among those found near his quarters and music studio.

Colangco’s studio has been dismantled.

An inmate who is an avid fan of Colangco, Gilbert Wagas, a former mayor of Compostela town, Cebu province, who claims to be the executive director of Colangco’s music operations inside the prison, has questioned De Lima’s actions.

“The real issue is not the supposed luxurious living of some inmates, but the congestion inside the facility,” said Wagas who is serving out a life sentence for a technical malversation conviction.

He also did not agree with the dismantling of Colangco’s music studio, which he said was enjoyed by other inmates.

Sen. JV Ejercito is seeking a congressional inquiry into the VIP treatment enjoyed by some high-profile inmates at NBP.

“We can’t just let this pass because this is a big slap to the judicial system, especially to the President’s straight path [policy]. This is a big blow to the justice system and the government,” he told reporters on Friday.

Ejercito said he would file a resolution proposing an inquiry into the issue when Congress resumes sessions in January.

Government agents swooped down on the national penitentiary on Monday and discovered drugs, gadgets, a sex doll and pornographic CDs, as well as a cache of firearms in the quarters of the VIP inmates.

They also uncovered a sauna and a game console, among other amenities, behind fake walls.

Ejercito did not rule out De Lima’s liability for the VIP treatment that some inmates inside the national penitentiary were getting.

“Under the principle of command responsibility, she may have a liability. But we also saw that she organized the raiding team, and we have to give credit to her,” he said.

“That might give them time to think of ways to slip out the contraband. We should seize them now,” he said.

Senate Minority Leader Vicente Sotto III said he would amend his bill proposing to revive capital punishment, to specifically impose the death penalty on high-level drug traffickers because of reports that drug criminals operated from inside the prison.

“That’s been going on for some time. They either pay the guards to use their cell phones … or they smuggle in their cell phones. As a matter of fact there was one time that a big-time drug lord was using a satellite phone to operate his drug business in Taiwan. The solution is, do not allow them to make the Philippines a playground for drug trafficking,” he said. With a report from TJ Burgonio

Congressman, other politicians own guns seized in New Bilibid Prison

Bilibid VIPs tipped off on raid