Congressman, other politicians own guns seized in New Bilibid Prison

MANILA, Philippines–Several firearms found in the “kubol” (quarters) of Peter Co, one of the high-profile inmates in the New Bilibid Prison (NBP), were registered separately in the names of a congressman, a barangay (village) councilman, a former candidate for representative and a government employee, records of the Firearms and Explosives Office of the Philippine National Police showed.

The Walther PPK (Serial No. 2004695) is under the name of Guimaras Rep. Joaquin Carlos Rahman Nava. It was registered in December 2011.

The Inquirer tried to contact Nava Thursday night for his reaction, but his phone just kept on ringing.

The Bushmaster 5.56-mm rifle (Serial No. 143382) is in the name of Carlos Tuquia, who ran under the Liberal Party for a House seat in the second district of Valenzuela City. 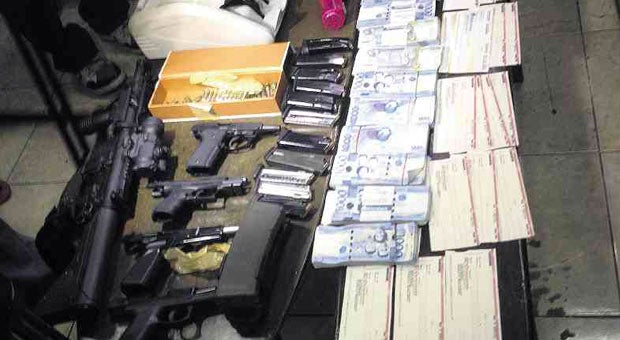 TOOLS OF THE TRADE NBI agents found money counting machines, a Bushmaster rifle, pistols, cash, checks and other items during the raid on the prisoners’ quarters. CONTRIBUTED PHOTO

The Browning 9-mm handgun (Serial No. 245PN6227) is listed in the name of Avelino Dalimocon Nicanor, a government employee with connections in the Bureau of Corrections.

The Taurus 9-mm (Serial No. TBU1297) is in the name of Vicente Tan Alindada Jr., a councilor in Caloocan City’s Barangay 8.

The firearms, records showed, were not reported stolen or lost.

A convicted drug trafficker, Co was also identified as Wu Tuan Yuan. He was among the 20 “VIPs” removed from the NBP maximum security compound in Muntinlupa City on a raid last Monday.

In February 2010, a raid on his cell by BNP personnel yielded five sachets of “shabu” (methamphetamine hydrochloride) containing 10 grams each and illegal drugs paraphernalia.

Co financed several political candidates in Metro Manila in exchange for protection, according to an intelligence report of antidrug units from the PNP and the National Bureau of Investigation.

“In order to further his drug business and widen his distribution areas, he financed electoral campaigns of politicians who would become his protectors,” an antidrug operative told the Inquirer.

Members of the NBI antidrug unit, led by lawyer Eric Isidoro, searched Co’s quarters when police and NBI agents led by Justice Secretary Leila de Lima swooped on the maximum-security compound of the NBP on Dec. 15.

Twenty inmates, (not 19 as earlier reported), believed to be drug lords, were transferred from the NBP to an NBI facility after the raid.

Based on an NBI report, Co’s carpeted bedroom had a digital lock and an electric water pump. It was equipped with closed-circuit television cameras.

Co’s bathroom included a sauna and a Jacuzzi, found behind a false wall.

Also found in his quarters were a projector, an Apple desktop, five cell phones, a bar, two bedrooms (one of which was equipped with disco lights), a vault with P1.4 million in cash, an undetermined amount of shabu, expensive liquors and wines, an Internet signal booster and a refrigerator filled with frozen meat.

Co was wearing a diamond-studded Rolex watch when he was taken from his quarters in the Commando Gang building being protected by a certain JB Sebastian.

De Lima is scheduled to return to the NBP Friday to find out if her order to dismantle the illegal structures of the high-profile inmates was carried out, according to NBI Director Virgilio Mendez.

Mendez said NBI agents would act as security escort of the justice secretary.