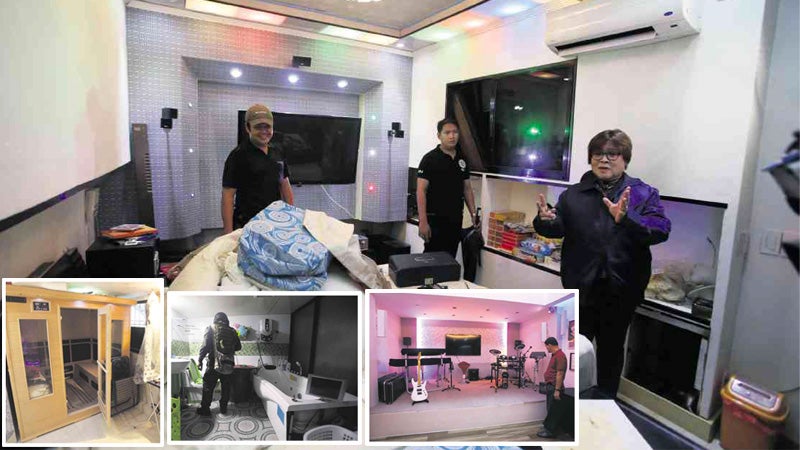 BILIBID OR NOT? LUXURIOUS QUARTERS IN MAXIMUM SECURITY COMPOUND Justice Secretary Leila de Lima leads a dawn raid on the air-conditioned rooms of powerful convicts at the New Bilibid Prison in Muntinlupa City. Peter Co’s room has a sauna while that of his assistant, Jojo Baligad, boasts of a jacuzzi. Convict Herbert Colangco’s room rocks with a music studio. EDWIN BACASMAS

MANILA, Philippines–One has a diamond-studded Patek Philippe watch. Four others have Rolex watches. One of them keeps a life-size sex doll. All have wads of cash in their pockets.

They were among the 19 convicts at the national penitentiary in Muntinlupa City staying in luxurious quarters that could pass for high-end condominium units from where they allegedly operate a nationwide drug syndicate.

One “kubol,” a space in the New Bilibid Prison (NBP) converted into a special detention area, has a jacuzzi.

Another has a sauna, wide-screen television sets in every room, Wi-Fi and split-type air-con units. Still another kubol has a generator and a music studio with top-of-the-line equipment.

This “luxurious” lifestyle of 19 convicts ended when Justice Secretary Leila de Lima swooped down at dawn Monday on the quarters of the high-profile inmates in search of evidence that would link them to the illegal drug trade in the NBP compound.

De Lima was accompanied by Director Virgilio Mendez of the National Bureau of Investigation, NBP head Supt. Franklin Bucayo and a phalanx of security escorts.

They found bags and sachets of white powder believed to be “shabu” (methamphetamine hydrochloride) in the first four kubol at the start of the operation. They also found cash totaling more than P2 million.

De Lima said she was more than disgusted at the discovery. “I thought problems like that are being dealt with because sometimes they (prison officials) conduct raids and they report results to me. They even have list of [seized] contraband. It now appears it’s just the tip of the iceberg.”

“Based on our study, their removal from the NBP would validate the combined reports of anti-illegal drugs agency that the inmates control the narcotics industry in the country,” De Lima said.

The justice secretary said the inmates would be stripped of communication tools and their visiting privileges suspended.

De Lima said that each inmate had bundles of money in their pockets when they were removed from their kubol that were converted into loft-style condo units in the maximum compound of the NBP.

According to an insider of the NBP, a kubol is sold for a minimum of P300,000 depending on its size.

“The proceeds are divided between the jail guard and the occupant of the kubol,” the insider said.

As of press time, the search was still ongoing.

De Lima said she had ordered the dismantling of the kubol as soon as possible.

Also seized from the kubol were bottles of expensive wine and liquor, and imported skin whitening creams.

Also seized from Co’s kubol were documents that contained lists of names with corresponding cash amounts and dates.

A kubol of Co’s assistant, Jojo Baligad, also convicted of violation of the anti-illegal drugs law, has a bath tub, a long conference table, a game console, a bar, a kitchen, and a life-size sex doll.

In Baligad’s two-bedroom cell were checkbooks, bills in a Louis Vuitton cash box and an undetermined amount of shabu.

A 60-square-meter music studio with an elevated floor that serves as the stage is decorated with photos of the patron and occupant, Herbert Colangco, a convicted gang leader of the Waray-Waray and Ozamiz robbery group. The studio has split-type air-con units.

Colangco said he also owned a generator for the studio, which he claimed was also used by other “reformed and talented inmates.”

The upper floor of Colangco’s kubol is furnished with a black leather sofa and a dining table with an unobstructed view of the tennis court.

Colangco claimed that the expensive watches were gifts from visitors, including an uncle, who is a congressman.

Bureau of Corrections Director Franklin Bucayu said items that should not be brought in a kubol could be classified into two: those that were “bad per se,” such as drugs, firearms and bladed weapons; and those that were “not per se bad but are prohibited” as they were considered “luxury items.”

He said the antennae, boosters, television sets and jacuzzi, among others, fell under the second category and would be removed.

The guitar and the drum set, he said, would be removed, adding it “would be nice” if these were used instead “by all” and transferred to an area where everyone can access them.

“That everyone benefits from (them), for the entertainment of all, not just for certain individuals,” Bucayu said, noting that the underlying principle behind the NBP was the “reformation” of the inmate.

According to Bucayu, the vaults “should not be there” and that the tiles and mirrors there “could be removed” so as not to give the perception that the kubol was “like a private pad.”

Bucayu said the kubol was also “not the place” to display Rolex watches and other similar luxurious personal effects.

“So, if those are owned by the (inmate’s) family, then the family should get them. (The NBP) is supposed to be a prison,” he said.

He added that if these were not claimed by the family, they could be “for safekeeping” in a vault where “all the personal effects of the inmate” are usually placed and returned to him “once released.”

“He will be given a receipt (of the items in the vault),” Bucayu said.

Bucayu acknowledged that some NBP personnel may have had a hand in the entry of prohibited items inside the facility, as these prohibited objects did not just “appear (there) as if by magic.”

He said if there was “sufficient evidence” that some personnel “facilitated the entry of these,” charges would be filed against them.

“We are very strict about that. We have already suspended many… Dismissal (is also a possibility),” he said.

“We will conduct a resurvey (of the NBP facility) and demolish (makeshift rooms) that we think are too big,” Bravo said, noting that the fixed kubol were already in the facility “under previous administrations.”

Among those to be demolished were the makeshift rooms of the four inmates where several “out-of-the-ordinary” items were found.