Bilibid VIPs tipped off on raid 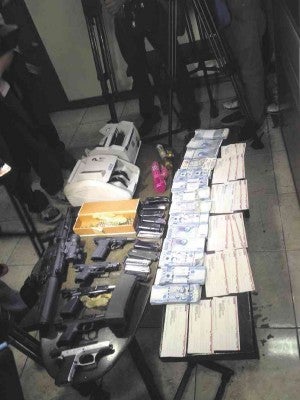 TOOLS OF THE TRADE NBI agents found money counting machines, a Bushmaster rifle, pistols, cash, checks and other items during the raid on the prisoners’ quarters. CONTRIBUTED PHOTO

MANILA, Philippines–Prison guards helped hide the quarters of so-called Very Important Prisoners (VIPs) and misled agents of the National Bureau of Investigation, who swooped down on New Bilibid Prison (NBP) on Monday to look for evidence that would link them to the illegal drug trade, according to an NBI official.

Worse, the inmates were apparently tipped off about the coming raid.

“Based on what we observed during the operations, the target inmates had been forewarned and were able to hide evidence of their ongoing illegal drugs operation inside the NBP compound with the help of some jail guards,” Eric Isidoro, the NBI head of the antidrugs unit, told the Inquirer on Wednesday.

Nineteen inmates believed to be drug lords were transferred from NBP to an NBI facility after the raid.

Justice Secretary Leila de Lima on Wednesday said plans were under way for a new raid on NBP in Muntinlupa City to catch inmates plying the illegal drug trade.

“We are evaluating the list [of prisoners involved in the drug trade] for a possible second wave of operations. Based on intelligence reports and information, they might also be involved in drug transactions, but I don’t think they are as big as the first [batch],” De Lima told reporters in an interview.

“Except for [Peter] Co’s kubol, we did not find anything in the kubol of Tony and Sy that were incriminating. We later found out that the cells pointed to us by the jail guards as those of the convicts were wrong,” Isidoro said.

“The raid was obviously leaked to the inmates because one inmate even told us, we were expected last Sunday,” said the NBI agent.

Isidoro’s team found a Walther PPK handgun, a 9mm Browning pistol, a 9mm Taurus pistol, a cal. 38 pistol and a Bushmaster rifle with optic sight in Peter Co’s kubol. These were hidden in a compartment behind a wall.

Also found in the compartment were loaded magazines and ammunition.

Isidoro said Co’s carpeted bedroom had a digital lock and an electric water pump covered by a garbage can.

Co’s bathroom included a sauna and a Jacuzzi, also found behind a wall.

“When you enter his kubol it showed a regular cell with electric fans, but we observed carpentry tools and noticed the smell of fresh paint. When we tapped the walls and removed the out-of-place Christmas tree, we saw a small hole. From that hole, we saw gym equipment,” Isidoro said.

“Behind the wall was the office of Co, equipped with a projector CCTV, an Apple desktop, five cell phones, a bar, the sauna and two bedrooms—one of which was equipped with disco lights,” the NBI agent said.

The kubol of Co yielded an air conditioner, a La-Z-Boy, and hot and cold shower and an aquarium.

Isidoro said the guards brought the NBI personnel to the quarters supposedly occupied by Sy, but, according to the inmates, Sy’s actual kubol was near that of the leader of Commando gang, who was not on the list of NBI targets.

“It was also the other inmates who told us that it was not Sy’s kubol. But the jail guard insisted it was the correct cell,” Isidoro said.

He said only Peter Co’s cell phones were seized. “Except for Co’s, we did not find any cell phones that would surely help in the investigation.”

The NBI deputy director for intelligence, Doy Doloiras, the ground commandeer during the raid, said all NBP officials and jail guards would be subpoenaed by the NBI antiorganized crime division led by Rommel Vallejo.

“This is an open investigation and all NBP officials and guards will be asked to explain how the guns and other luxurious items were brought inside the state penitentiary,” Doloiras said.

He said that an inventory of all the items seized from NBP had been submitted to De Lima.

“Evidence, including cash, was properly tagged and other evidence will be submitted for forensics such as SIM,” Doloiras said.

Besides guns, cash and high-end appliances, the raiding team had unusual discoveries such as diamond studded luxury watches, a 60-square-meter music studio, bags and sachets believed to be shabu, wads of cash and a life-size sex doll.

The Palace vowed to “undertake all measures [to] ensure that these things would not happen again.”

“The conditions that we found in the Bilibid are really unacceptable. Those things should never have been there in the first place. The existence of all these contraband is not allowed in the first place,” presidential spokesman Edwin Lacierda told reporters.

In the House of Representatives, lawmakers are calling for an exhaustive probe of the NBP mess and the officials responsible for tolerating the excesses of its rich and powerful inmates.

Iloilo Rep. Niel Tupas Jr. said the House justice committee would resume its probe of NBP next month, with officials of the Department of Justice and Bureau of Corrections to be summoned to explain why anomalies in the NBP maximum security compound have worsened even after these were exposed in the 2011 probe of the special privileges accorded to former Batangas Gov. Antonio Leviste.

“We in Congress are worried that abuses inside NBP are getting worse even after we made inspections inside the facility itself,” said Tupas in a phone interview.

The House committee on justice held a series of hearings on the NBP abuses over the last three years, two of which were held in the facility itself.

Tupas said the luxurious villas of the drug lords were far more extravagant than the kubol of former Rep. Romeo Jalosjos, which was exposed years ago.

Akbayan Rep. Walden Bello said he found it “disturbing” that the situation had worsened under De Lima’s watch.

Bello said the most shocking thing he found out about NBP was that drug lords were allowed to own high-powered guns. “The reality of New Bilibid is really crazier than fiction,” Bello said.

“Secretary De Lima has to accept command responsibility for this and shake up her penal staff. It’s time to review the policy of having the inmates police their ranks with the prison management keeping its distance. Is the current model of prison reform working?” Bello said.

But ACT Teachers Rep. Antonio Tinio said De Lima should be credited for conducting a raid on NBP that exposed the abuses.

“Once exposed, these cannot be covered up. The challenge now is for the Aquino administration to display the political will to implement the necessary prison reforms through the end,” Tinio said.

Asked why prison officials implicated in various controversies continue to serve at the penitentiary, De Lima said: “Some of them have administrative cases. But the problem is due process, there are ongoing administrative proceedings. Some have served preventive suspensions. That is why they are there again. There are only a few [prison] superintendents. So, what’s being done is to reshuffle them or rotate them in various penal farms.”

De Lima said NBP officials who were found to have approved the entry of contraband and luxury items inside the penitentiary were being investigated.

The prison officials have been ordered to explain why they should not be held administratively liable. De Lima said she would disclose “in due time” what would be done against the guilty ones.–With a report from Christian V. Esguerra