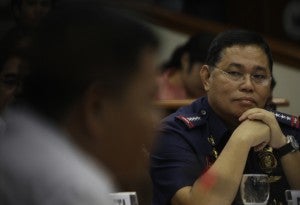 MANILA, Philippines–As Ombudsman Conchita Carpio-Morales suspended the Philippine National Police (PNP) chief, Director General Alan Purisima is out of the country to represent the organization at a conference in the Kingdom of Saudi Arabia (KSA).

Purisima left for KSA on Wednesday to meet with law enforcement officials there to “enhance cooperation against transnational crimes”, according to PNP spokesperson Chief Superintendent Wilben Mayor.

Mayor said Purisima is expected to return to the country on December 9, Tuesday.

Mayor said they have yet to receive the order from the Office of the Ombudsman.

‎In September, when a consumer rights group filed graft, plunder and indirect bribery charges against Purisima, he was also out of the country for an anti-kidnapping and anti-extortion conference in Colombia.

The multiple complaints were based on the highest PNP official’s ‎alleged hidden properties in Nueva Ecija, the controversy surrounding the P25-million “White House” and the P100-million contract with WERFAST.

The PNP and Interior Secretary Manuel Roxas II have yet to announce‎ who will replace Purisima as acting PNP chief.

If his term as PNP chief would continue after the suspension, Purisima is scheduled to retire in November 2015. ‎

Palace on Purisima suspension: We are a gov’t of laws