Despite Purisima's close ties with Aquino, Palace to abide by suspension | Inquirer News

Despite Purisima’s close ties with Aquino, Palace to abide by suspension 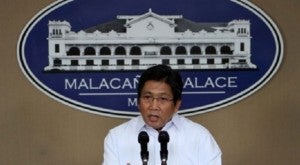 MANILA, Philippines – Malacañang on Thursday declined to comment on whether President Benigno Aquino III still supports his ally, Philippine National Police (PNP) chief Director General Alan Purisima, after the latter was was placed under preventive suspension by the Office of the Ombudsman.

“The government shall abide by the decision of the Ombudsman,” Communications Secretary Herminio “Sonny” Coloma Jr. told Palace reporters.

“Tayo po ay pamahalaan ng batas, hindi ng tao (We are a government of laws, not of people),” he added.

The Office of the Ombudsman on Thursday suspended Purisima and several others for purportedly brokering an allegedly  anomalous P100 million courier service contract with WERFAST Documentary Agency.

Purisima, who will be suspended for six months without pay, is currently in Saudi Arabia for a business trip. PNP spokesperson Superintendent Wilben Mayor said Purisima will return to the country on Tuesday, Dec. 9.