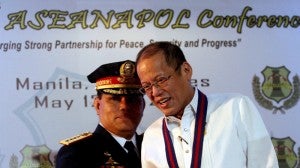 “He should retire or resign or whatever. He should remove himself from service already … You can   call it falling on your sword on behalf of his   boss, the President,”   Senator Sergio Osmeña III said   in an interview at the Senate on Thursday.

Purisima and other police officers were   placed   under preventive suspension by the Office of the Ombudsman for allegedly   brokering an anomalous P100-million contract with Werfast Documentary Agency.

Another senator called on President Benigno   Aquino III to immediately   appoint a “capable leader” to run the PNP.

“I hope for an immediate and orderly transition of leadership within the PNP to   preserve public order and   assure the people’s security this holiday season,” Senator Grace Poe said   in a text message to reporters on Thursday.

“I also hope his (Purisima) suspension will not adversely affect police work and our internal security situation   as   I call on the President to immediately appoint a capable leader to run the PNP during the suspension,”   Poe said.

Poe heads   the Senate committee on public order and   dangerous drug that also looked into Purisima’s allegedly   unexplained   wealth.   She earlier suggested   that the   PNP chief should take a leave.

Asked if Purisima should step down from his post,   Poe said   the decision   would now be   up to the   Ombudsman or the   President.

Osmeña said he could only hope that the President would do the right thing since Aquino has a tendency to be “hard-headed.”

“You know the President is hard-headed. He stands by his friends, which is not good. In many instances, especially in government, standing by your friends is not a virtue, it’s   a shortcoming,”   Osmeña said.