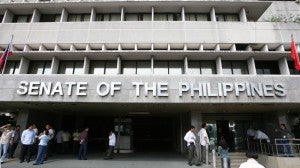 The senators also introduced amendments to the budget measure, House Bill No. 4968, including additional realignments amounting to P4.756 billion.

These were on top of the P91.8-billion realignments earlier approved by the Senate finance committee after several hearings.

The Senate panel would meet with its counterpart from the House of Representatives on Tuesday for the bicameral conference committee to reconcile their versions.

“This is in accordance with the proposal of the Office of the Presidential Assistant for Rehabilitation and Recovery, which said they need an additional more or less P50 billion for next year,” he said of the rehabilitation fund.

The senators incorporated several special provisions, including penalizing heads of departments for their failure to submit reports on lump-sum funds, Escudero said on the floor.

They put in a similar provision in the budget of the Philippine Sports Commission, saying that funds for athletes should be used solely for them.

Funds should also be made available for nonmembers of national sports associations competing for the country even in events not sanctioned by the Philippine Olympic Committee, they said.

In yet another such provision, the senators required the Department of Public Works and Highways (DPWH) to consult heritage agencies and other stakeholders for any construction that might impinge on heritage sites.

They also allowed the National Museum, National Historical Institute and the National Commission for Culture and the Arts to use their income to maintain existing heritage sites and facilities.

The senators also mandated the Land Transportation Office to pay its obligations in contracts it had entered into.

They also allowed the DPWH, Department of Health, Department of Transportation and Communication, and Department of Education to use their quick-response funds to procure insurance policies to cover infrastructure facilities and other equipment in danger zones.

The senators also adopted the backtracking of accomplishments of various agencies, Wi-Fi Internet access in public facilities and the designation and disaggregation of lump-sum items.