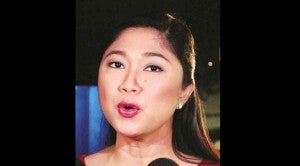 The Commission on Audit (COA) has asked Taguig Mayor Lani Cayetano to account for more than P317.4 million that the city government spent on salaries of its contractual employees, who seemed nowhere to be found.

In its annual financial report for 2013, the COA noted several adverse findings in its audit of the financial transactions of one of the richest cities in the country.

Cayetano is the wife of Sen. Alan Peter Cayetano, one of the three senators leading the Senate inquiry into corruption allegations against Vice President Jejomar Binay and his family.

Incidentally, Mayor Cayetano was charged with plunder and graft in the Office of the Ombudsman for alleged irregularities in City Hall, among them the supposed hiring of almost 3,200 “ghost employees.”

The Taguig City government on Wednesday declined to comment on the issues raised by the COA report.

Lito Laparan of the Public Information Office said the office had “just downloaded” the report from the COA website and was “in the process of reading it.”

Laparan said a statement would be released today. “As soon as we have the statement, we will inform you,” he told the Inquirer.

The COA said the “absence of the payroll register and the specific places of assignment of the job order personnel under the different programs of the city hinders” its audit of the amount given to contractual workers.

“We have recommended the immediate submission by the Human Resource and Management Office of the lists of job order personnel with their corresponding unit of assignments to facilitate the audit,” the state auditors said.

The results of the audit on the Taguig City government were contained in a 918-page report that COA Commissioner Heidi Mendoza submitted to President Aquino on Sept. 25.

The report, a copy of which was obtained by the Inquirer, also included the annual audit reports of 79 provinces, 144 cities, 1,446 municipalities and 29,947 village councils nationwide.

The auditors said the city government should have just created regular positions to allow it to source the payroll money from its personal services expenditures.

The COA directed the city government to refund almost P39 million it released as bonuses to contractual workers, saying the granting of such benefit violated a Department of Budget and Management (DBM) circular.

“Appropriate plantilla positions have not been created for the different offices of the city. Hence, contract of service for contractual and job order personnel under the different development projects/programs was charged to OMOE (other maintenance and operating expenses) account,” it said.

To avoid employing casual workers, the COA said, the city government should “prioritize the creation of an appropriate organizational structure and plantilla positions … for effective governance.”

It said City Hall must also “classify and record the salaries of contractual and job order personnel [under] personal services accounts pursuant to the updated description of accounts in the New Government Accounting System.”

The agency asked the city government to “stop paying incentive to the [contractual workers] without legal basis to avoid audit disallowances and to cause the refund of the amount paid as performance incentive bonus in 2013.”

In addition, state auditors ordered City Hall to justify the hiring of consultants and questioned the “propriety” of the payment of more than P18.43 million in consultancy fees after it failed to present documents for such arrangement with private individuals.

“We have recommended that [the city government] include the terms of reference in the consultancy contracts and require the submission of their accomplishment reports to justify the necessity, propriety and legality of the hiring of the consultants of the city,” the COA said.

“In coordination with the accounting office … prepare a report on the expired drugs, medicines and medical supplies together with discrepancy on the inventory of supplies and medicines,” the COA said. With a report from Kristine Felisse Mangunay