In the know: Coconut levy funds 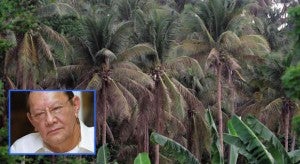 Businessman Danding Cojuangco was instrumental for the imposition of the coconut levy fund during the Marcos dictatorship. INQUIRER file photo

President Ferdinand Marcos imposed a levy on the produce of coconut farmers between 1972 and 1982, supposedly to develop the coconut industry.

The Coconut Consumers Stabilization Fund levy was imposed from August 1973 to May 1980 under Marcos’ Presidential Decree 276, which was signed on Aug. 20, 1973. The decree stated that there should be a P15 levy for every 100 kg of copra “for the benefit of coconut farmers.” Marcos later amended the decree in 1974, through PD 414, which increased the levy to P100 per 100 kg of copra.

On May 22, 1980, the Coconut Consumers Stabilization Fund was suspended through PD 1699, due to strong public criticism but a levy on exportable coconut products was imposed through the Coconut Industry Development Project Fund from June 17, 1980, to Sept. 9, 1981.

Meanwhile, the Coconut Industry Stabilization Fund was imposed from October 1981 to August 1982, restoring the coco levy that was suspended in 1980.

In 1975, Marcos authorized the Philippine Coconut Authority (PCA), the agency tasked with developing the coconut industry and whose board included businessman Eduardo Cojuangco, to use the funds to buy a bank “for the benefit of the farmers.”

With the PCA and UCPB in their control, Cojuangco and his associates were able to buy firms and mills placed under the Coconut Industry Investment Fund (CIIF), a group of 14 holding companies whose assets included 47 percent of San Miguel Corp. (SMC) These assets were held by UCPB, the CIIF administrator.

The Presidential Commission on Good Government (PCGG) sequestered the SMC shares and other assets held by UCPB on the ground that these were illegally acquired by the dummies of Marcos using funds from the tax imposed on coconut farmers.

In December 2001, the Supreme Court declared the coco levy funds as “prima facie (apparently) public funds,” but left the Sandiganbayan to determine the owner of the assets acquired with the funds.

In May 2004, the Sandiganbayan awarded the 27-percent block of SMC shares to the government, which holds it in trust for the country’s coconut farmers.

The Supreme Court ruled in 2012 that the 24 percent (originally 27 percent but diluted and reduced because of SMC’s expansion) belonged to the government in trust for the country’s coconut farmers.

In 2012, the PCGG recovered P71.6 billion from SMC shares, including dividends and accrued interest, which the government claimed were acquired with coconut levy funds. Inquirer Research