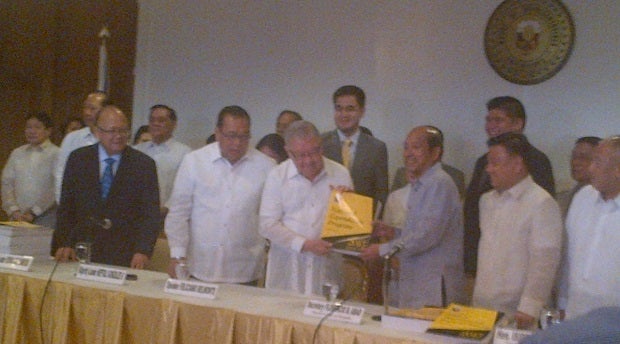 MANILA, Philippines — Something’s different in the Aquino government’s proposed P2.606 trillion national budget for 2015 submitted to the House of Representatives on Tuesday.

The proposed budget also represents 18.4 percent of the Gross Domestic Product reflecting the target GDP growth of 7 to 8 percent.

It’s now free from funds from the graft-tainted Priority Development Assistance Funds (PDAF) or pork barrel funds, which the Supreme Court (SC) has already struck down as unconstitutional.

The budget will also no longer be a source of savings that may be pooled to other projects, as was the practice of Aquino’s outlawed Disbursement Acceleration Program (DAP) that critics say is the source of the president’s “pork barrel.”

That is, if the SC decision is to be followed.

But President Benigno Aquino III in his latest State of the Nation Address (Sona) said the executive would submit a joint resolution asking to define savings after such practice of pooling these unspent funds to other projects not itemized in the budget was declared unconstitutional by the SC.

If savings would be redefined, then government might still continue with its DAP practice despite the SC decision.

The president had also proposed submitting a supplemental budget on top of the P2.265-trillion budget in 2014 to augment the lack of funds for projects stalled due to the court’s prohibition of the DAP practice.

Meanwhile, the PDAF figured in an alleged scam of pouring these funds to ghost projects for kickbacks under the scheme of accused mastermind Janet Lim-Napoles. Three senators and their aides are detained for plunder over the scam.

The breakdown of the P2.606 trillion budget: