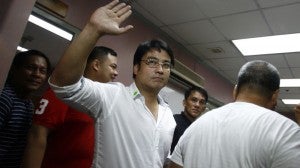 MANILA, Philippines — State prosecutors have opposed Senator Ramon “Bong” Revilla Jr.’s motion to spend overnight at the St. Luke’s Medical Center in Taguig City, saying he can have his medical tests as an out-patient.

“In fact, these tests can be done by the accused as an out-patient. Thus, there is no need for the accused to stay overnight in the hospital, outside his place of detention,” the prosecutors said in a comment/opposition filed before the Sandiganbayan first division Wednesday.

The prosecutors also said the supposed ailment of Revilla — persistent migraines and cough and colds — was diagnosed by his personal physician and not a government doctor.

“Revilla has not been examined by a government physician who can verify and attest to the fact that he is indeed suffering from the medical conditions and that he must undergo further medical check-up and diagnostic tests..” they said.

The prosecutors said the court should deny Revilla’s motion for lack of merit.

But should the court grant it, Revilla should only be allowed as an out-patient, they added.

“The prosecution prays that the Court limit the accused Revilla’s medical check-up as an out-patient,” the prosecutors said.

In a manifestation filed before the anti-graft’s first division, Revilla asked the court to allow him overnight medical work-up and consultation on November 17.

Dr. Ma. Cristina Macrohon-Valdez, in a medical certificate attached to the plea, said she was recommending “a full medical work-up and consultation with other respective specialists as soon as possible.. so as to prevent further complications.”

The medical certificate issued showed that Revilla was “complaining of coughs and colds associated with generalized body malaise for one week duration on top of recurrent migraine headaches.”

In an earlier check-up, Revilla was diagnosed with the following medical problems — migraine headache, lumbo-sacral radiculopathy secondary to spondylosis, hypertension not well-controlled, and dyslipidemia.