MANILA, Philippines–Detained Sen. Bong Revilla on Thursday asked the Sandiganbayan to allow him to undergo a medical checkup, a move that government prosecutors suspect is a “prelude” to the senator asking for hospital arrest. 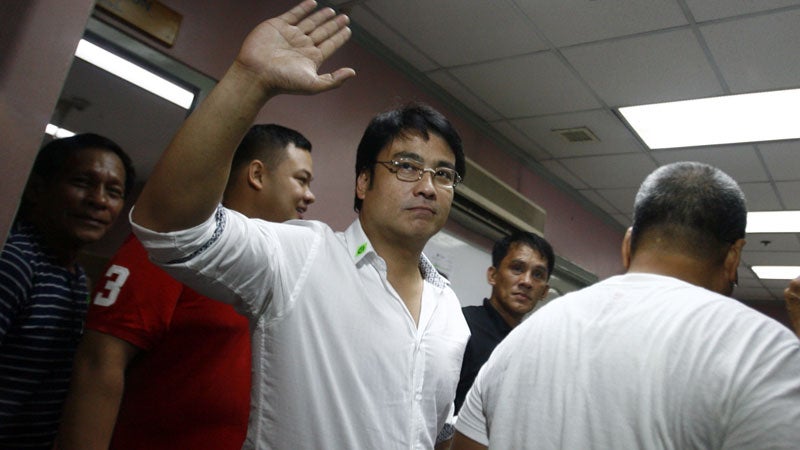 Speaking with reporters after attending his bail hearing, Revilla laughed off insinuations that he would ask for hospital arrest like Sen. Juan Ponce Enrile if his petition to post bail for the plunder and graft charges in connection with the P10-billion pork barrel scam was denied.

In his petition, Revilla, who has been detained at the Philippine National Police Custodial Center at Camp Crame since his arrest last June, said he had been suffering from the flu and asked to be allowed to see his doctor and undergo medical tests at St. Luke’s Medical Center in Taguig City “at the soonest possible time.”

He said he had been suffering from migraines, lumbo-sacral radiculopathy secondary to spondylosis, hypertension and dyslipidemia, a condition of having abnormal amounts of lipids in the blood.

But lead prosecutor Joefferson Toribio raised doubts about Revilla’s real intention in seeking medical attention, saying the senator may just be laying the grounds for him to join Enrile at the police hospital.

“We’re just surprised that they are filing (the motion) now when we are ready to end our presentation (of evidence) for the bail hearing,” Toribio said.

“So this might be a prelude to hospital arrest just in case the bail petition is denied. We suspect the timing of the filing. Senator Revilla always says that he is in tip-top shape. He always exercises,” he said.

Since his arrest almost five months ago, the 90-year-old Enrile has been held at the PNP General Hospital at Camp Crame, after the Sandiganbayan approved his petition for hospital arrest.

But Revilla said he merely wanted his doctors to check on his health, noting that his migraine attacks had become frequent and worsened since his detention.

“Why would I ask for hospital arrest? I don’t need to be in a hospital because I’m physically strong. I prefer where I am right now,” he said in Filipino.

“If the court allows me to have my medical checkup, it’s OK. But if the court won’t allow me, it’s also OK. If I die inside the jail, that’s also fine with me. That’s how life is sometimes,” he said.

Revilla’s lawyer, Joel Bodegon, also denied that his client was eyeing hospital arrest, saying the senator’s legal team was confident the court would let Revilla post bail because the evidence against him was weak.