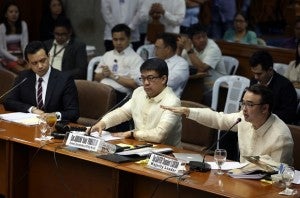 “That would be a dangerous precedent and could be misconstrued as interference with a co-equal branch of government,” he said, reacting to the President’s reported questions raised over the ongoing investigation being conducted by the subcommittee into the allegations of anomalies being hurled against Vice President Jejomar Binay.

Pimentel said that instead of meddling with the affairs of the Senate, the President should impose a deadline to the separate investigation being conducted by the Department of Justice (DOJ) on the same issues against Binay.

(The DOJ has its own investigation of the same subject so he should be giving the DOJ a deadline—not the Senate—because it is the DOJ that is under him.)

Senate President Franklin Drilon earlier said he would leave it up to the subcommittee to decide whether or not to wrap up its investigation.

(Of course, we would listen (to the suggestion), but the decision as to whether the gathered evidence and testimonies are already enough or not lies on the subcommittee’s chairman and members.)

(We can’t stop it on our own, because it is the (subcommittee) which will vote if it has enough evidence already.)

Asked if he would then meet the subcommittee to get its consensus, Drilon said: “I am sure they will consider that in the process of their decision making.”

But the Senate leader asserted the authority of each senator to look into any issue presented before a committee.

(The committee still wants to look other buildings. It has the right and authority to do so.)