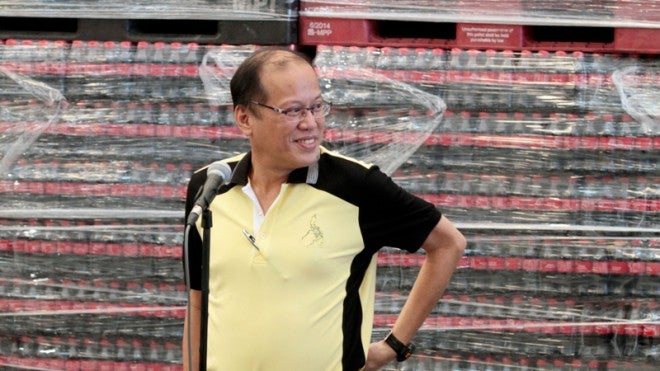 President Aquino prepares to answer questions from reporters during an ambush interview at the inauguration of the $95-million plant expansion of Coca Cola Femsa Philippines in Calamba City on Monday. After being asked by reporters about the criticisms hurled by Vice President Binay against his administration, Aquino said Binay was free to leave “if he thinks we are going in the wrong direction.” INQUIRER PHOTO/GRIG C. MONTEGRANDE

“If he thinks we are going in the wrong direction, he’s free to leave,” Aquino said in a talk with reporters after inaugurating the $95-million plant expansion project of Coca-Cola Femsa Philippines here.

The leader of the opposition United Nationalist Alliance (UNA), Binay has been going around criticizing the administration since the Senate began investigating him on charges of corruption on Aug. 20.

He has not resigned from the Cabinet, however, and continues to lead the government’s housing and migrant workers’ programs.

Aquino reminded Binay that as the second-highest official of the country and a member of the Cabinet, it was his “obligation” to inform the President on “how to improve the system.”

“Just to be clear, if he had solutions, I don’t think I heard them during Cabinet meetings, he should have shared them. Of course, the question is why didn’t he,” Aquino said.

Binay said he was staying.

“I have the highest respect for President Aquino and I will continue to be a team player,” Binay said in brief statement released by his office on Monday.

Asked if he continued to trust Binay despite the allegations of corruption against him, President Aquino said the alleged irregularities “happened before” Binay was elected Vice President.

Binay, he said, enjoys a “presumption of innocence until proven guilty.”

Aquino also commended Binay, chief of the Housing and Urban Development Coordinating Council, for the “achievements of the housing sector [on] his watch.” Binay is also Aquino’s adviser on migrant workers’ affairs.

A Senate blue ribbon subcommittee is looking into the alleged overpricing of the P2.28-billion Makati City Hall Building II, which was built during Binay’s term as mayor of the city.

Former Makati Vice Mayor Ernesto Mercado, the principal witness in the inquiry, has testified that Binay pocketed kickbacks from municipal infrastructure projects and uses dummies to conceal his ill-gotten wealth, including an 8,877-square-meter real estate property in Comembo village, Makati, and a 350-hectare agricultural farm in Rosario town, Batangas province.

Binay has denied the allegations, but refuses to appear in the Senate to answer the charges.

President Aquino also fired back at his congressional ally, Akbayan Rep. Walden Bello, who said on Sunday that the administration was “losing the moral high ground” in the fight against corruption by not going after its own allies.

“He has so many complaints. I suggest that if he thinks only his views are correct, he should run for President in 2016 so that, if he’s elected, he can run the country according to his vision,” Aquino said.

“For now, I think I am doing what is right and necessary,” the President added.

“We cannot have a double standard by condemning Vice President Jejomar Binay while tolerating administration allies involved in the [Janet Lim-] Napoles [pork barrel] scam and the [Disbursement Acceleration Program, or DAP]. A double standard has a tremendously corrosive effect on civic morality,” Bello said.

Aquino defended his officials, particularly Abad, who, according to Bello, are “trapos” (traditional politicians) masquerading as reformers.

Aquino took note of Bello’s complaint that Batanes province, Abad’s political bailiwick, got P177 million from the DAP in the thick of the election campaign in 2013.

Bello said Batanes got the sixth-largest DAP allocation although it was “the smallest district with the smallest population and smallest number of registered voters.”

“What would happen to our most depressed and poorest provinces if that would be the basis?” he asked.

“I respect the President and know he’s doing his best. These decisions are tough, but leaders are there to make hard decisions. My appeal to him: Please don’t shoot the messenger but listen to him,” Bello said in an e-mail to the Inquirer on Monday.

Bello said running for higher office was never in the cards for him, as he was nearing 70, but he would consider running for President in 2016.

“I never was one to walk away from a challenge and a dare, especially from someone I respect,” Bello said. “If what he’s saying is he’ll support me, then I’ll have to think about it seriously, because I can’t let him down, can I?”

Although saying he respected the President’s defense of Abad, creator of the DAP, an economic stimulus fund that the Supreme Court struck down as unconstitutional in July, Bello stood his ground.

“I just beg to differ with him,” Bello said. “For me, it’s clear as day that it was nepotism. This is the problem when absolute power over the budget is wedded to lack of transparency. As Lord Acton said, it (absolute power) corrupts absolutely.”

Remulla said Binay never criticized President Aquino but the Vice President “did point out deficiencies where he thinks needed work.”

He said the Vice President was willing to give advice to the President if asked to do so.

“He just doesn’t want to preempt the President,” Remulla said.

Binay, he said, gives the President his opinion on housing matters, as that is his assignment in the Cabinet.

For Caloocan Rep. Edgar Erice, the President’s statement was a “clear signal” for Binay to leave the Cabinet.

“It’s just a light way of saying that the Vice President is no longer needed in the Cabinet. The President [made] that statement precisely because the Vice President’s action is not the action of a team player,” Erice, an ally of Aquino, said in a text message.

“My guess is that if Binay will file a courtesy resignation, it will be accepted in five minutes,” he said.

Erice said there were many competent government officials who could be considered as a replacement for Binay for the housing program. Among them is National Housing Authority General Manager Chito Cruz, he said.

But he said he believed Binay would not leave the administration.

“Binay will not resign. He will cling to his post. He will endure the humiliation because he is using his Cabinet post in his campaign, including the use of government resources,” Erice said.

“If the President cannot accept criticism, especially from one who considers him a good friend and loyal to him, then that’s the tragedy. He should not put malice into the Vice President’s criticisms,” he said.