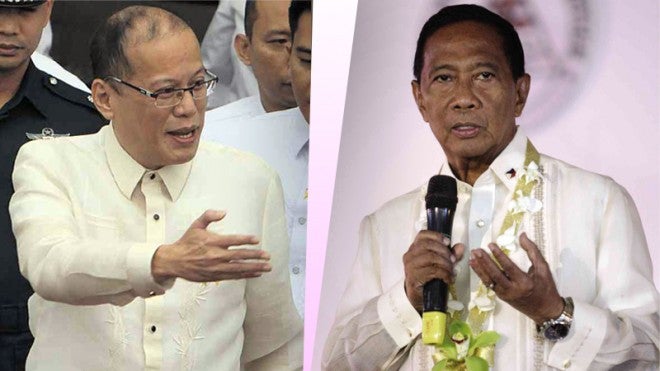 CROSSING THE RUBICON? Is this the end of the friendship and political alliance between President Aquino and Vice President Jejomar Binay? On the defensive the past weeks over allegations of massive corruption in Makati City where he served as mayor, the Vice President is on the offensive, taking to task the Aquino administration for its shortcomings and selective justice in his remarks at a public attorneys’ forum on Tuesday. GRIG C. MONTEGRANDE/NIÑO JESUS ORBETA

MANILA, Philippines–Vice President Jejomar Binay appears to be moving to cut his ties with President Aquino as he slams for the first time the latter’s controversial decisions, like allowing the Disbursement Acceleration Program (DAP) that the Supreme Court has declared unconstitutional.

Binay, 71, also took a swing at the way the Aquino administration was allegedly mistreating former President Gloria Macapagal-Arroyo while handling with kid gloves Philippine National Police Director General Alan Purisima, who like the Vice President is alleged to have amassed unexplained wealth.

It was a combative Vice President who spoke at the 5th MCLE (Mandatory Continuing Legal Education) Accredited National Convention of Public Attorneys at the Manila Hotel.

He blasted not only the Senate blue ribbon subcommittee investigating the corruption allegations against him but also moves by the Department of Justice (DOJ) to investigate him.

Binay took exception to Justice Secretary Leila de Lima’s statement that she was investigating him upon the request of the Senate, saying the blue ribbon subcommittee had not even completed its inquiry.

“The cat is out of the bag. It is all part of the script that really, by all means, this is their operation—Operation Anybody but Binay,” the Vice President said during the open forum.

From hurling corruption allegations against him in the Senate inquiry, the next plan against him, Binay said, was to impeach him given De Lima’s statement that he can be investigated and that he can face impeachment.

But the Vice President said he would not allow this to happen.

“I have fought many times. There were many instances that the law was broken, and I will not allow this. The only reason I can be removed from office, among others, would be for the violation of the Constitution during my term as Vice President. That is very clear,” he said.

Binay said he could not understand why the DOJ was prioritizing him in its investigation when it was still in the midst of investigating the pork barrel controversy and the DAP.

Apparently, it was the alleged impeachment moves by administration officials and allies that broke Binay’s silence over controversial issues that Aquino was facing.

Replying to a question whether he would treat his enemies the same way he was being treated now should he become President, Binay said he wanted to be a “unifying” President who would subject his political foes to a truth commission, for instance.

Then he said that he had “no love lost” for Arroyo, who is detained in a hospital as she awaits the outcome of many cases filed against her by the Aquino administration. Binay said Arroyo made his life difficult when she tried to suspend him from office many times.

“Is the way they are treating Arroyo fair?” he said, asking why the court seemed not to act on her petition for bail after the prosecution had presented its case against her.

“She is no ordinary person because she became President. And she is sick. Is that fair?” he added in Filipino.

Binay then turned his ire on Aquino’s pet program, the illegal DAP. He said “there was no such animal” despite what Malacañang said of the program, which pooled savings from agencies for spending to jumpstart the economy.

“What is their defense? The end justifies the means. That DAP was used for various things. I think it’s high time our lawyers come in where there is a violation of law,” Binay said.

Binay then said that the Aquino administration was implementing “selective justice,” noting how the opposition seems to be its target.

He said that after the administration detained Senators Juan Ponce Enrile, Jinggoy Estrada and Bong Revilla for their alleged misuse of pork barrel funds, it stopped there, no longer pursuing others.

Binay then took aim at Purisima, saying that until now, no case had been filed by the administration against the PNP chief, who recently was questioned about his house in Nueva Ecija province and his luxury vehicles.

“The allegations against Jojo Binay come from one person,” he said in Filipino, referring to former Makati City Vice Mayor Ernesto Mercado.

Mercado has accused Binay in the Senate of rigging the bidding for infrastructure projects of Makati City when he was still mayor and of accepting kickbacks from favored contractors.

No sense of gratitude

Binay said one of the things that angered him were people who didn’t have a strong sense of gratitude.

“I fed this witness with my hand. He even cried before me,” the Vice President said of his former vice mayor.

Binay did not spare the media, saying that with the controversies against him, media should air both sides.

“If they want to destroy you, they’ll come out only with negative things,” he said in Filipino.

During the open forum, Binay vowed he would not appear at the Senate blue ribbon subcommittee hearings for the way it was handling the inquiry.

“I won’t dignify that kind of proceeding by attending it. Ladies and gentlemen, I am the Vice President of the Republic of the Philippines.”

During his speech, Binay said he was again being “prosecuted and persecuted by politicians, who seemed to be fueled more by personal ambition than a search for truth.”

Speaking to reporters later, Binay echoed what his party mates had said regarding a plot to destroy his chances in the 2016 presidency. He said this involved Interior Secretary Mar Roxas, the presumptive presidential candidate of the Liberal Party.

“Because when you ask who are the people around him, the people who are maligning me, aren’t they with Secretary Roxas?” he said.

It was the first time Binay linked Roxas to the plot supposedly named Oplan Stop Nognog 2016, aimed at derailing the Vice President’s pursuit of the presidency.

Asked to comment on De Lima’s statement that the DOJ would forward its investigation results to the Office of the Ombudsman, Binay said he was wondering why the DOJ was investigating him when the Senate subcommittee had not even completed its inquiry and presented its findings to the Senate blue ribbon mother committee, which will still have to come up with a recommendation.

He said it was “OK” that the DOJ was investigating him and that if he said he would not want to be investigated then some quarters would say that no one was above the law.

Told that De Lima spoke on Tuesday with the whistle-blowers in the corruption allegations against him, Binay said his position was that they should not be included in the Witness Protection Program because they were telling lies just to become state witnesses.

On old graft cases against him being reopened by the Ombudsman, Binay said he would just wait for the outcome.

Told that Rep. Edgar Erice of the Liberal Party planned to file an impeachment case against him, he said that was Erice and that the media knew who he was.

“He is part of the group behind Oplan Nognog,” he said.

Trillanes on Nancy Binay’s impeachment dare: ‘We’ll get there’