In a barely veiled attack on the administration of President Benigno Aquino III, embattled Vice President Jejomar Binay on Saturday night enumerated the chief complaints of the public that, according to him, his detractors must deal with.

“There is a power crisis, the rising prices of oil and other commodities, the rampant crimes plaguing the country, the hellish traffic jams, unsafe MRT and LRT, the recurrent flooding and the wrath of nature that we must all prepare for,” Binay said in a speech at the 32nd anniversary celebration of the Lions’ Club District 301-D2 at the Manila Hotel.

“But instead of giving all their time and thoughts to achieve solutions to these problems, they chose to advance their own interests by destroying my name and those of my loved ones,” he said, referring to administration allies in the Senate who have mounted an inquiry into alleged corruption in Makati during his term as the city’s mayor.

He said those members of the Senate had been blinded by their ambition and were now using a blue ribbon subcommittee to “unjustly persecute” him and his family.

“The gift of sight is one of the most priceless gifts that anyone can give to a fellow human being. I only wish that you could have extended that gift to some members of the Senate who have been so blinded by political ambition,” Binay said.

“Their recent activities and actuations are no longer in aid of legislation but in aid of political persecution. Indeed, they have made the Senate inquiry a platform to unjustly persecute my person and office, my family, and in fact anyone who has had even the remotest association with me,” Binay said. 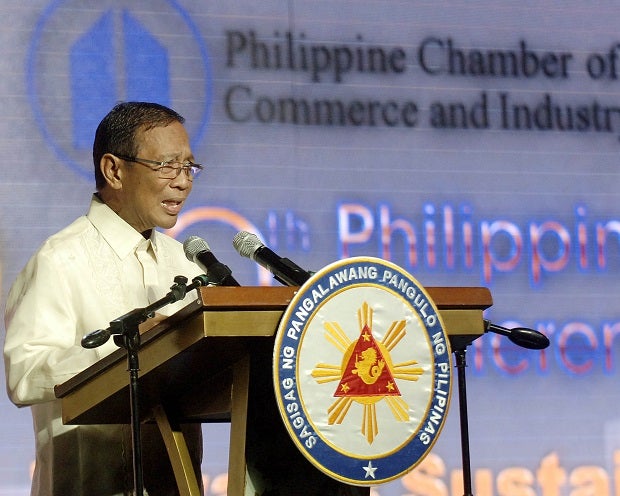 Then, without directly referring to President Aquino, Binay pointed to many pressing problems of the country.

“We thought they had been solved in the 1990s. But they are here like ghosts haunting us now,” Binay said.

Asked later if his statement was directed at the administration of President Aquino, Binay said: “It was not against the President. I was just saying a factual information.”

The Senate blue ribbon subcommittee is investigating allegations of corruption against Binay, including the alleged overpricing of the P2.28-billion Makati City Hall Building II, which was constructed when he was the city’s mayor.

Former Makati Vice Mayor Ernesto Mercado, the principal witness in the inquiry, has accused Binay of taking 13 percent of the cost of municipal infrastructure projects in kickbacks and concealing assets, including an 8,877-square-meter property in Comembo village in Makati and a 350-hectare farm in Rosario town, Batangas province.

In his speech, Binay said President Aquino had been praising him for his performance as head of the key shelter agencies. “I never thought of tarnishing someone else’s name to get what I wanted to achieve,” he said.

Binay described the testimonies of the witnesses in the Senate inquiry as “recycled” charges that his detractors revive every time elections are near.

“An example is the hectares of land they say I own. During elections in Makati, they would say I own 5 hectares. It became 10 until it reached 350 hectares,” he said.

He said the cases against him had been filed in the Office of the Ombudsman but were later junked. He said the law, whether he is a poor or a wealthy man, should protect him from “double jeopardy.”

“It seems my rivals would not respect the decisions of the concerned courts, unless the ruling is favorable to them,” he said.

Binay advised his political rivals to direct their attention toward measures for economic progress and inclusive growth.

“Many plausible strategies for the attainment of these goals can be drawn from what many call the Makati miracle. The progress achieved in my home city in over two and half decades is demonstrable proof of competent and compassionate governance,” he said.

Meanwhile, the Alpha Phi Omega (APO) fraternity has mobilized its more than 100,000 members here and abroad to support Binay in the critical chapter of his political career.

Mel Adriano, a Manila-based businessman and former APO national president, yesterday said he was in the United States to accept declarations of support for Binay from more than 30 APO-Philippines alumni associations in North America.

“We support VP Jojo Binay not only because he is an APO brother but because he is the most qualified and has the track record of getting things done,” Adriano said in an interview on Facebook.

Binay has been a member of APO since 1960 during his college days at the University of the Philippines Diliman.

APO claims to have more than 360 collegiate chapters in the Philippines.

Binay never fails to credit the fraternity’s support in his victory in the 2010 vice-presidential election.

Adriano said all APO members across the country, college residents and alumni, most of them professionals, had reaffirmed their commitment to support Binay.

“They [are] active on social media, spreading the truth about the false allegations and lies at the Senate blue ribbon subcommittee,” Adriano said.

The blue ribbon subcommittee has repeatedly invited Binay to the inquiry to answer the allegations against him but the Vice President has adamantly refused to come, saying the senators have already prejudged him.

Speaking to reporters in Pagadian City last Friday, Binay reiterated that he would not go to the hearings, charging that the inquiry was a “kangaroo court.”

“The Senate is prejudiced. It’s a kangaroo court,” Binay said.

The Vice President said it was pointless to air his side because what the subcommittee was doing was not an investigation but a demolition job.

“I presented my side three times but they [said] I would not explain,” he said, referring to his public speeches in which he tackled the accusations of Mercado and other witnesses called to the inquiry.

Binay said he did not want to go to the inquiry because it was apparent that for the senators on the subcommittee, particularly Antonio Trillanes IV and Alan Peter Cayetano, he was guilty.

“Would you go to a place where you [know] you would be degraded, shouted at? If you are the Vice President, will you go there?” he said.

Binay cited the experience of businessman Antonio Tiu, who appeared at the inquiry last week claiming he was the owner of the Batangas property and got a grilling from the senators.

“They threaten witnesses. Mr. Tiu, who owns the land being questioned, knew what really happened. The Senate has become a kangaroo court,” Binay said.

The Vice President criticized Cayetano for his demeanor at the hearings.

“He appears to be all-knowing,” Binay said.

Referring to the alleged overpricing of Makati City Hall Building II, Binay said his accusers had been unable to present credible evidence of overpricing. In contrast, the contractor has said there was no overpricing and there was no bribery, he said.

But the disclosures at the inquiry have hurt Binay’s standing in early presidential opinion polls, with his rating falling to 31 percent in the September Pulse Asia poll from 41 percent in June. He remains on top of the heap, though.

Adriano said APO members’ support for Binay was “voluntary” and “from the heart.”

“They are not paid like other groups,” he said.

Most APO members interviewed by the Inquirer said the Senate inquiry was politically motivated, intended to tarnish Binay and take him out of the 2016 presidential race.

They said several polls had shown that Binay had a comfortable lead over his prospective rivals, particularly the Liberal Party’s presumptive standard-bearer, Interior Secretary Mar Roxas.

Binay has transformed his political coalition United Nationalist Alliance, the vehicle he used to launch his vice-presidential campaign in 2010, into a political party in preparation for a presidential run in 2016.

In the Southern Tagalog and Bicol regions, APO members have also been mobilized to counter the “black propaganda” against Binay, Joselito Joy Merjudio, chair of APO-Southern Luzon, told the Inquirer.

Merjudio, who is based in Pagbilao, Quezon province, said some APO lawyers had volunteered to do radio and television hopping to explain to the public that the Senate inquiry is a political demolition job.

He said the fraternity members also had plans to hold public forums to enlighten the public on the “lies and concocted allegations” against Binay.

“Most chapters in southern Luzon have also been busy accepting declarations of support for Brod Jojo from different community organizations and APO local chapters and alumni groups,” Merjudio said.

The latest Social Weather Station poll showed that 79 percent of Filipinos want Binay to go the Senate inquiry and face the allegations of corruption against him.

Mejudio said he, too, believed Binay should go to the inquiry.

“But the subject of the hearing in his presence should only be confined to the issues,” he said.

There should be no “ad libs” from committee members,” Merjudio said.

But Cavite Gov. Jonvic Remulla, Binay’s political spokesperson, said the Vice President would rather go directly to the people to air his side.

Binay is scheduled to be in Lucena on Oct. 28 for the Quezon Federation of Senior Citizens Conference at Quezon Convention Center. With reports from Delfin T. Mallari, Inquirer Southern Tagalog, and Julie Alipala, Inquirer Mindanao