No DAR record of Gregorio as Batangas landowner 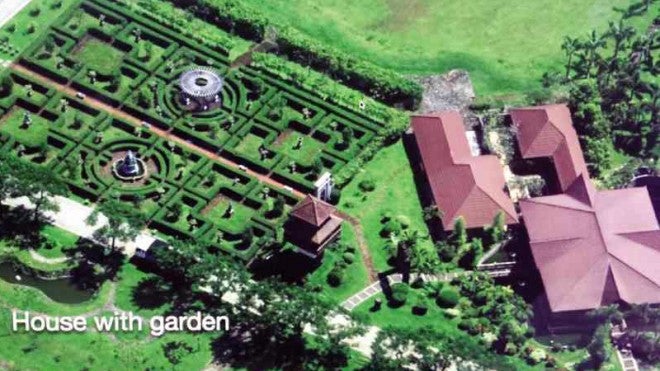 Photo of part of the 350-hectare high-end farm allegedly owned by Vice President Jejomar Binay and that businessman Antonio Tiu claimed he had bought from Laureano Gregorio Jr. Agrarian Reform Secretary Virgilio de los Reyes said on Monday that the Department of Agrarian Reform has no record of Gregorio Jr. either as a landowner or as a farmer beneficiary in Rosario, Batangas province, where the farm is located. CONTRIBUTED PHOTO BY ERNESTO MERCADO

MANILA, Philippines–The Department of Agrarian Reform (DAR) has no record of Laureano Gregorio Jr. either as a landowner or as a farmer beneficiary in Rosario, Batangas province, Agrarian Reform Secretary Virgilio de los Reyes said on Monday.

“We have no record of a Laureano Gregorio as a landowner or FB (farmer-beneficiary) in the six barangays (villages),” De los Reyes said on the phone, referring to the villages straddled by the property in Rosario town.

Asked what this meant, the agrarian reform secretary said he did not want to speculate.

Tiu on Thursday furnished senators a copy of a January 2013 agreement with Gregorio, allowing Tiu’s Sunchamp Real Estate Development Corp. to use the property for his agro-tourism venture. The memorandum of agreement, however, was not notarized.

The businessman admitted advancing P11-million as payment for the P446-million property.

From Tiu’s testimony, it was clear in the minds of the senators that Gregorio owned the property, said Sen. Aquilino Pimentel III, chair of the Senate blue ribbon subcommittee inquiring into the allegedly overpriced Makati City Hall Building II and the high-end farm.

Gregorio is now the subject of a “show-cause order” to justify why he should not be cited in contempt for skipping last week’s hearing.

“Based on Tiu’s testimony and his interpretation of the agreement, he’s supposed to be the owner, who will transfer full and clean ownership to Sunchamp and Tiu,” Pimentel said on the phone.

“But the question is, what is his (Gregorio’s) claim to the 150 hectares? How come Tiu and his lawyers believe that he represents ownership interests?” he added.

Former Makati Vice Mayor Ernesto Mercado has accused Binay of owning a P1.2-billion high-end farm in Rosario town. Tiu has come forward to claim ownership of less than half of it.

Binay’s lawyer said the farm was only 145 ha, not 350 ha, and 9 ha of this was leased by Binay starting 1994. Binay’s JCB Farms occupied three hectares.

Binay sold JCB Farms for P10 million to Agrifortuna, which is owned by Gregorio. The Binay couple were incorporators of Agrifortuna for a paid-up capital of P50,000 but sold their shares to Gregorio in 1995.

Sunchamp acquired Gregorio’s rights to the property, a transaction that was disclosed to the Philippine Stock Exchange.

Tiu said Sunchamp was leasing land from several parties, including Agrifortuna Inc., but the contract with Agrifortuna was for less than 10 ha.

De los Reyes confirmed that the zoning in that area of Rosario town was agricultural.

But he said the DAR had yet to determine which part of the property was covered by the Comprehensive Agrarian Reform Program (CARP).

The agrarian reform secretary said that once the DAR obtained copies of the maps of the 150-ha or 350-ha property, it would be able to determine their boundaries, and compare them with certificates of land ownership award (Cloas) held by farmer-beneficiaries.

“When we have the boundaries, we can plot in the Cloas and then look at the records,” De los Reyes said.

“The Senate committee will need to send me the maps so I can project which Cloas in our files are covered by the property. I can’t make a definite statement whether there was a violation or not, because I have to know whether the Cloas in the six barangays are part of the transaction,” he added.

In the entire Rosario town, only 150 hectares of landholdings have yet to be covered by DAR’s land acquisition and distribution, according to De los Reyes.

“I don’t think it (150 hectares) is all in those six barangays. It’s in the entire Rosario,” he clarified.

The conversion of the land for agritourism purposes was another matter, the secretary said.

If it’s covered by Cloa, the landowner or farmer-beneficiary has to seek clearance from the DAR as well as from the departments of agriculture and environment.

So far, there was no such application for conversion of the property filed with the DAR’s central office in Quezon City, he said.

At the Senate blue ribbon subcommittee hearing on Oct. 30, De los Reyes said it was illegal for Gregorio to have consolidated the farm without informing the DAR.

He said a landowner could lease land not exceeding 5 ha and not covered by CARP for agricultural purposes. A landowner should get clearance from the DAR before leasing the land.

De los Reyes said a landowner, after being awarded the land, could not convert its use in five years and not sell it in 10 years, otherwise it would be illegal.