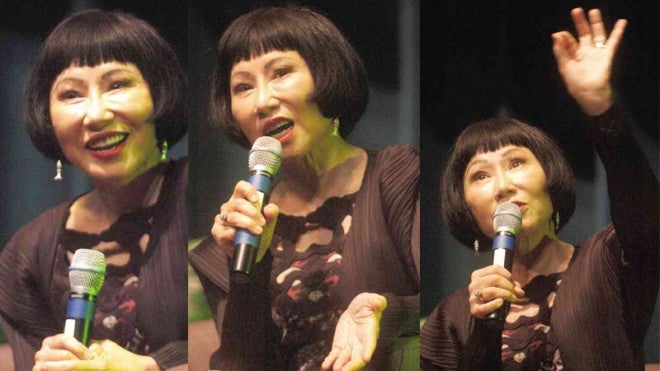 When Amy Tan was in high school, she wanted to be like the “worldly kids who wore fur coats and smoked.” Tan is the writer of “The Joy Luck Club,” her first book that became an international best seller, and 11 other titles that include two children’s books.

“I saved up my money from years of babysitting and bought a fur coat. It was a rabbit coat, very cheap …. I tried to do everything to be like the other kids,” Tan told students at International School Manila (ISM) when she came in October to grace the Philippine Literary Festival hosted by National Book Store at the Raffles Makati.

Like her audience, she went to an international high school, which was in Switzerland. Her schoolmates were children of ambassadors and kids from different parts of the world. Tan’s mother had moved with her and her younger brother to Europe from the United States after her father and older brother died of brain tumors.

“I came from a poor family …. Looking back, it was impossible for me to achieve the material trappings of those kids. But what I realized later was that I should not have wanted to be anyone else,” Tan said of the most important lesson she learned in life.

The Chinese-American novelist, known for writing about the dynamics of mother-daughter relationships, said that throughout her life, her mother had told her a litany of things: “Why do you want to be like anybody else? Why do you want to follow somebody? Why do you want to do what is popular? Popular doesn’t mean anything. Popular is going to go away. You should not let anyone’s opinion determine how you think of yourself or let anybody tell you who you should be.”

Tan said her mother, although not a writer, was her biggest influence and inspiration as a writer.

“When she tells a story,” Tan said, “she would return to the scene and act it all out. It was so dramatic. Her stories are my inspiration.”

Her teenager audience, middle and high schoolers at ISM, were born way after her first book was published in 1989. They seemed able to relate to “Joy Luck” though, despite its being a quarter of a century old. Some of them had just finished reading the book, which is required reading in Grade 10.

The excitement was evident in the endless chatter about finally meeting “the Amy Tan” and the long queue to the microphone of students wanting to ask questions. Some students stayed around after the program to interview the writer and take selfies with her.

Duell said that in the ISM classes that read “Joy Luck,” the students were assigned by the teacher to pretend to be characters in the book and to write letters to Tan, some of which they gave to the writer during this visit.

When Duell asked Tan what gave her book timeless popularity, the writer said young adults identified with the characters because they, too, were feeling a lack of understanding from their parents and alienation from their peers.

“Over the years, I found out that even in schools with a hundred ethnicities, students still feel that way, a sense of being different,” Tan said. “The book raises some questions they will be able to think about. And they actually approach their parents many times, saying, ‘I want to know about our family’s past.’”

Although most of her books after “Joy Luck”—including “The Kitchen God’s Wife,” “The Hundred Secret Senses,” “Saving Fish from Drowning,” “The Bonesetter’s Daughter” and the latest, “The Valley of Amazement”— were based on her mother’s stories and some personal experiences, Tan stressed that they were fictional.

“The person who knew that best was my mother. She was very irritated that people did not give me credit for having a wild imagination,” Tan said.

Part of her fiction was based on her life, she said. Her books were fueled by questions she had—the confusion, conflicts and ambiguities.

“What I mean by that is that I may have an opinion about hope, for example, or love or what is right or wrong, how you should feel about the suffering of others. Those are the questions that get put in the book,” she said.

Tan said she was impressed with the students’ questions. “That is a very, very good question,” she even told a boy who asked how she chose a topic for a story.

People might think a story was simply a narration of what happened, she said. But for her, stories came from questions like “What do we mean by forgiveness? Why should I forgive?”

Some questions were ugly but stories originated from them just the same, she said.

Apart from questions, Tan said what helped her create a story was image. “Not a visual image but more like a hologram or a panorama with a lot of people in there and the questions on why they are all there.”

The students, most of whom described themselves as aspiring writers, sought help from Tan on the process of writing a story.

A girl said she was having a hard time creating concrete characters because they did not seem real to her until she found just the right name, among other things.

“Don’t beat yourself up,” Tan advised her. She said that she, too, would make hundreds of revisions per page before a book was finished.

“The names of my characters can change from the first year I write the story up to the time things begin to settle in,” she said. “I know what is wrong and what’s not complex enough in my characters as the story moves forward. But everything comes together—the name, the character, the narrative—at a certain point. The confluence, the coming together doesn’t happen in the beginning.”

There were times when she felt that she had lost her ability to write, Tan said, but eventually the confluence would happen. “So just be patient and keep working through your narrative and your character. And then eventually you’ll say, ‘Aha! This is the name that feels right for all the right reasons.’”

Tan also warned that a writer’s life, in general, was full of rejection. “But when your reasons for writing are genuine, meaning you have a passion for it no matter what, you will stay with it and you will persist despite repeated rejections.”

The writer recalled that when she was 6, she was told she should be a doctor and a concert pianist on the side.

“I suffered from the notion that I should never attempt to write because people had determined what I should be,” she said.

She did not begin writing fiction until she was 33 although, in her spare time, she had been writing stories to try to find meaning in her life. She enrolled in a fiction workshop at Squaw Valley Community of Writers.

“Writing is the way I find meaning in my life. When I was working other jobs, I became very successful, had a lot of money, but I didn’t find meaning. I kept thinking: What is this meaning that we are supposed to find? I realized that we could find meaning in our daily life,” Tan said.

For some people, there is meaning in raising their children or in being a teacher, she said.

“For me, it is in the act of writing. It is not in being published. People mistakenly think that the meaning of your life as a writer is to have your book that, sitting out there, somebody is going to read, but it is really the process of writing.”