Binay sees self as ‘threat’ to probers, aspiring bets

MANILA, Philippines–Vice President Jejomar Binay said on  Tuesday  that  those  investigating  him are afraid they would  be held  accountable  for  their “misdeeds and  abuse of power” should  he  get  elected  president in  2016.

Binay made this  statement as he called on the  people  to take  a closer look at the  ongoing Senate  investigation  into the  parking building  controversy in Makati “to see what  it really is.”

“First, the so-called legislative agenda of that investigation has been unmasked as simply an inquisition designed to bring disrepute to my person by the abuse of parliamentary rules,” he said. 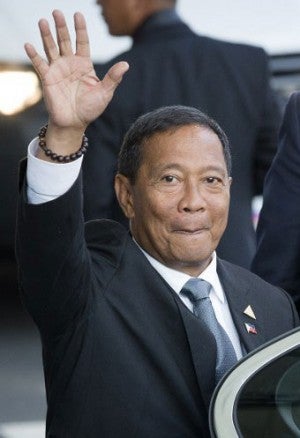 “Those investigating me are simply there because as they admitted they do not want me to even launch a presidential campaign, obviously fearing that should the people support me they would be made accountable for their misdeeds and abuse of power.”

“And they themselves want to be in power and see me as a threat to that ambition,” said  Binay, who has  declared his  intention  to run for president  in 2016.

“If there are serious accusations being peddled by my enemies, the truth could be proven in a way that civilized societies do–with hard, unassailable evidence,” he said.

“I ask our people to examine closely the direction the so-called investigation is taking. So far, they have resorted to humiliating me and my family with such viciousness I have not seen employed by the Senate before,” he pointed out.

“The so-called investigation at the Senate sends a dire warning to everyone: that for the sake of politics, civil rights are the first casualty,” he said.

“I pity the ordinary government employees and citizens who are being hammered, the effect on their daily affairs, the scorn and ridicule they are being subjected to that no private individual should suffer in a democratic society,” Binay said.

Binay to Senator Santiago: Prejudged, will you still go to hearing?

Santiago: ‘What is Binay afraid of?’