Binay to Senator Santiago: Prejudged, will you still go to hearing?

MANILA, Philippines—If you have been prejudged, would you still go to the hearing?

This was Vice President Jejomar Binay’s reply to Sen. Miriam Defensor-Santiago’s contention that the Vice President’s continued absence from the Senate inquiry into his alleged corruption constituted a betrayal of the public trust—an impeachable offense. 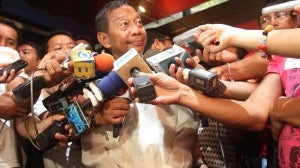 Binay has been facing a string of accusations, including rigging the bidding of government contracts, taking kickbacks and acquiring expensive real estate when he was mayor of Makati.

“We are both lawyers. But if you were in my position, if you were told to go to a hearing where you have been prejudged, where you will just be disrespected, if I tell you, you will just be threatened, and when there is already a case before the Ombudsman… If I tell you that the hearing is no longer in aid of legislation, would you still go?” Binay said in an interview in Davao City on Friday.

A Senate blue ribbon subcommittee is investigating the alleged overpricing of the P2.28-billion Makati City Hall Building II, and witnesses alleged that Binay and his son, Makati Mayor Jejomar Erwin “Junjun” Binay, had been rigging the bidding process for infrastructure projects in Makati and taking kickbacks from the contracts.

The inquiry has now expanded to include the alleged ill-gotten wealth of the Binays, including allegations by former Vice Mayor Ernesto Mercado that the family owned a 350-hectare estate in Rosario, Batangas, and expensive property in Tagaytay.

Binay has denied owning both properties and maintained that the original allegation—the supposed building overprice— was also false as the contract was aboveboard.

The Vice President, who has expressed his intent to seek the presidency in 2016, has also declined invitations by the Senate to appear at its inquiry. His camp maintains that the accusations are part of a coordinated political operation to discredit him ahead of the presidential elections.

On Friday, Santiago said Binay had no choice but to yield to the Senate, or else be accused of betrayal of public trust for failing to answer the accusations “fully and immediately.”

Binay, whose public approval ratings have dropped as the inquiry expanded, said the “lies” being spread against him have hurt.

“You know I’ll be a hypocrite if I don’t tell you [that] sometimes, I get mad. Especially [since the allegations] are foul, below the belt, and they would lie and say this is not politically motivated. I’ve been through this before,” Binay said in the comments made in Davao, which were released to the media on Saturday.

His spokesperson, Gov. Jonvic Remulla, meanwhile said the Vice President’s camp expects the Senate to grant full immunity to Mercado and other officials who have testified to the alleged kickback at the Makati City Hall while admitting to taking some money for themselves.

“Given the way Mr. Mercado was accommodated by some senators during the hearings even after he admitted committing a criminal act, I won’t be surprised if they give him immunity just so he can continue to make baseless allegation after allegation against Vice President Binay,” said Remulla, Binay’s spokesperson for political concerns, in a statement.

He said they already knew the next step that his accusers would take: Present a former Makati purchasing officer, a Mercado “protégé.”

“We expect him to show spurious and questionable documents. This is part of their game plan. Mercado and Mario Hechanova (another witness) colluded to rig biddings, especially to favor Twin Leaf which is owned by Mercado,” Remulla said.

He lashed out at Senators Antonio Trillanes IV and Alan Peter Cayetano for taking Mercado’s revelations at face value, saying the decision to seek government protection for the witness was already “proof of bias and disregard for the law.”