Vice President Jejomar Binay is impeachable for betraying public trust by refusing to answer the corruption charges against him in the Senate, Sen. Miriam Defensor-Santiago said on Friday.

“Betrayal of public trust; it’s broad enough to cover anything,” Santiago said when asked if the Senate inquiry into the allegedly overpriced P2.28-billion Makati car park had pointed to an impeachable offense by the Vice President.

“I mean you’re the Vice President. People look up to you. In case the President dies, they expect you would have the same competence and efficiency, and therefore the same level of service to the people,” Santiago told reporters.

“They look up to you, and all of a sudden, there are these horrendous accusations against you, which to the mind of a reasonable person can’t just have been invented. Only the most perverse mind can invent that and hope to prove it in court,” she added.

Binay had declined to attend the Senate inquiry into the allegedly overpriced Makati car park, where he had been accused of taking kickbacks. Instead, the Vice President tapped several spokespersons to defend him in press conferences. 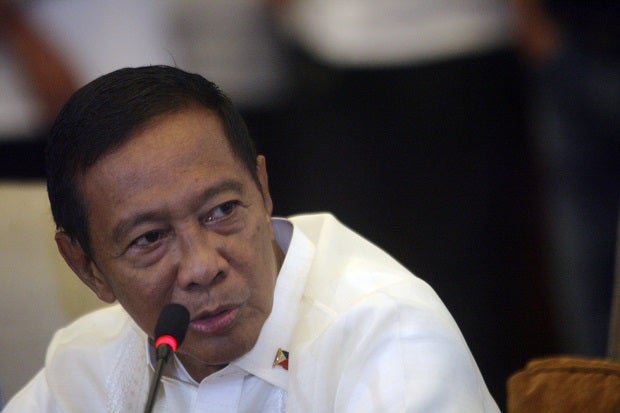 President Aquino meanwhile distanced himself from allegations of corruption thrown against the Vice President.

“I don’t have personal knowledge (of) what has been going on in the City Hall of Makati. What I know is based on the testimonies of the witnesses (during the Senate hearing televised on TV),” the President said in an interview with reporters in Bali, Indonesia, at the sidelines of the Bali Democracy Forum.

Asked if he would want Binay to appear at the Senate hearing to air his side, Mr. Aquino said he was leaving that decision to the Vice President.

“He is an astute politician; he’s a lawyer. And he’s older. He should know what should be done,” he said.

“I am giving him the respect and courtesy due his office and as a friend, he will be the best judge as to what he has to do,” Mr. Aquino said, adding that he would ask the Vice President to explain the allegations only when the Ombudsman had provided him an “established fact.”

The President also expressed satisfaction over the Vice President’s performance as the head of the Housing and Urban Development Coordinating Council (HUDCC).

“He should be given credit for his role in helping us achieve those (housing) targets,” Mr. Aquino said.

The Senate blue ribbon subcommittee had decided to send a second invitation to Binay, asking him to respond to charges that his family owned a P1.2-billion, 350-hectare agricultural estate in Batangas province.

“By becoming the subject of sheer accusations, without (him) answering them fully and immediately, the person already betrays public trust,” Santiago said.

The senator, however, doubted that there was ample time to impeach the Vice President ahead of next year’s campaign period for the 2016 presidential election.

“It seems like a physical improbability. You have to go through a sort of a preliminary investigation (by) the House of Representatives… Then they file what is in effect a complaint with the judge (that) is the collective Senate. All of that will take a lot of time, particularly since lawyers are very, very addicted to delay,” said Santiago, a former trial court judge.

Santiago took jabs at Binay in her speech before the Philippine Association of Real Estate Boards Inc. at the Bellevue Hotel in Alabang.

“The Vice President said he’d skip the hearing because the charges are not truthful. Is that the attitude of a person [who] has been maligned? If you’ve been maligned, don’t you want to punch the other person? … Why doesn’t he want to appear there? What is his reason?” she wondered.

“If you say, ‘I won’t answer the charges.’ What conclusion do you expect the public to make? If you want to be a public official, then subject yourself to all the trials and tribulations of being a public officer. Because a public official should not be thick-skinned,” she added.

She said the presumption of innocence on Binay’s part had been “eclipsed” by the testimony of former Makati Vice Mayor Ernesto Mercado, which she described as admissible since Mercado had admitted his role in the Makati anomalies.

It’s now Binay’s turn to present his own “counter-evidence” so that the “burden of evidence is carried out by both sides, she added.

“(The) normal reaction of an innocent person (is that) he tears at his hair, he drives himself through the roof, he shouts to high heavens for justice, and then presents his evidence,” the senator said.

“He cannot just say, ‘They’re all lies; I deny all of them.’ The presumption of innocence is not a defense. It’s a mere presumption created by law. The moment the probable witness begins to present hard evidence, the burden of evidence is now on the other party. That’s why the Vice President has the burden of appearing in the Senate and presenting his evidence,” Santiago added.

Otherwise, if Binay continued to refuse the Senate invitation, it would “imply guilt,” Santiago said.

“If that is the attitude then the burden of evidence will never be carried forward… Mercado will have the forum all to himself. If you are innocent, why do you allow him to enjoy that advantage over you since only one side will be heard by the public?” she said.

“The media cannot invent the news. It can only report the news as it happens. Mercado testifies, the media reports. [If] Binay does not testify, then the media cannot report a thing except his protestations of innocence that ring hollow because of the evidence presented against him,” she added.

Santiago shrugged off Binay’s argument that the Ombudsman had assumed primary jurisdiction of the plunder charges filed against him over the Makati car park that began construction in 2007 when he was the city’s mayor.

She said the Senate could inquire into any matter regardless of any hearing in court, a power that she said has been upheld by the Supreme Court in a long line of cases.

Binay and the court of public opinion