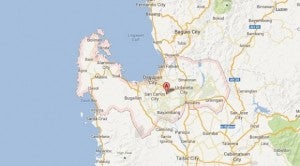 BAYAMBANG, Pangasinan—The elementary school transfer that had agitated parents here was part of a land swap deal in 2013 between a businessman and the town government, according to documents obtained by the Inquirer.

The Parents-Teachers Association (PTA) of Bayambang Central School had picketed the school’s new site, saying its transfer there was supposed to be temporary and was improperly done.

The school transfer was facilitated in October last year by the town government at the request of former PTA officials, who had complained that the old school area was perennially flooded.

Parents objected to the move, but a local court restrained the protests, allowing the school’s temporary transfer to its present location.

On Saturday, PTA officials obtained an unsigned copy of a deed of exchange between the municipality of Bayambang and a Mangaldan businessman named Willy Chua, who used to own the school’s present campus.

In exchange, Chua turned over the school’s present site that sits on a 2-ha property in Barangay Bical (not Magsaysay as earlier reported), which is about 3 kilometers from the old campus.

According to the deed, Chua had turned over a titled property worth P152.8 million composed of a two-story building with 60 classrooms and a covered court.

The deed describes Chua as the general manager of Super Concrete Aggregates and obligates him to donate projects worth P30 million to the school.

“But is it legal to swap a public land with a private property?” asked Filipina Alcantara, the PTA president.

She urged Education Secretary Armin Luistro to determine whether the relocation of the school to the new campus was legal.

The school’s original campus lies on a municipal land, which used to be part of a military reservation as shown by a May 25, 1912, document signed by Charles Smith, juez de tribunal del Registro de la Propiedad, Estados Unidos de America, Islas Filipinas.

The Inquirer could not find documents indicating that the new campus had been transferred to the Department of Education.