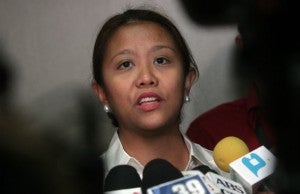 MANILA, Philippines — Senator  Nancy  Binay  assailed  the  Senate  blue ribbon  committee on   Tuesday for being “one-sided” and  for  giving  preference to  requests   made by administration  senators.

Binay said she could hardly understand “the apparent inaction” of the committee being headed by Senator Teofisto Guingona III on her repeated requests for certain documents on questionable releases under the Priority Development Assistance Fund (PDAF) and Various Infrastructures Including Local Projects (VILP).

“How long does it take for the Blue Ribbon Committee to get the documents it needs on PDAF? It has been more than a year since I requested for documents pertaining to the releases of PDAF and VILP funds–pero hanggang ngayon ni isang piraso ng report eh wala pa akong nahahawakan (But until now, I still have not received a single report),”  she said  in a statement.

(Isn’t the Blue Ribbon Committee supposed to be just in hearing cases? Why does it act faster when allies are the ones making requests? It cannot just drop the previous cases if it finds a more sensationalized one.)

Binay said that by the way the hearings are conducted, the committee has “ceased to be an independent and non-partisan panel, and has instead become a lowbrow jury concentrating on loose talks.”

(That’s why Senator TG should remember his role as the chairman and that he should not let the Blue Ribbon’s investigations to be one-sided. They already heard the PDAF (scam case), so if there are still unresolved issues, then they should take a look at these and not just ignore them.)

Binay pointed out that since September 12, 2013, she has been asking for the documents on the following:

Guingona’s first reply, she said, only came November 7, 2013, telling her of the committee’s transmittal of the request for the said documents from the Department of Budget and Management (DBM).

On December 13, 2013, Binay said the DBM sent its reply to her request but she said the letter only held the findings of the Commission on Audit (COA) report on the PDAF and VILP.

She said the DBM told her that it still had to validate the COA findings and that a DBM Task Force had been formed for this purpose. It also informed her that the findings of the Task Force would still have to be presented to the COA before it could be sent to the senator’s office.

“I am curious as to why the DBM still needs to go over its Task Force’s findings with COA when the documents I am asking for [are] from the DBM. Is it not sure of its reports on the PDAF and VILP? Is the DBM trying to hide details of its transactions from the Blue Ribbon Committee?” Binay asked.

On February 17, 2014, she said she wrote Guingona, reiterating her request for the aforementioned documents. She said she received a reply from Guingona on February 20, 2014, repeating that her request had already been referred to the DBM and that another letter would be sent in order to follow up on her request.

“What we all want is to solve this case once and for all. We should not leave any issue unsolved. We should not stop with Napoles when there are so much more NGOs involved in this scam,” the senator said, referring to  detained Janet Lim-Napoles, the alleged mastermind  of the so-called “pork barrel” scam.

(The blue ribbon committee should not show preference for the cases it is hearing. The PDAF (scam) is one of the biggest issues that need the attention of Senator TG’s committee. I think that the documents I am asking for are important so we can shed light to the PDAF scam. It is important for us to know which NGOs are involved in anomalous transactions, and the (probe) shouldn’t end on Napoles.)