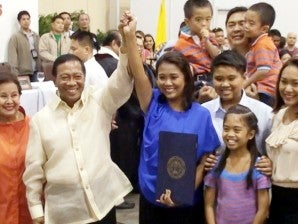 ALL IN THE FAMILY Vice President Jejomar Binay raises the hand of his daughter, Nancy, after her belated proclamation by the Commission on Elections, sitting as the National Board of Canvassers (NBOC), at the Philippine International Convention Center Saturday, May 18, 2013. RYAN LEAGOGO/INQUIRER.net FILE PHOTO

MANILA—Sen. Nancy Binay objected Friday to moves to invite her father, Vice President Jejomar Binay, to a Senate investigation into the alleged overpricing of two Makati City buildings, and said the proper way to hold him to account was to file an impeachment complaint against him.

Sen. Antonio Trillanes said on Friday that the vice president would be asked to appear in the Senate to explain the allegedly exorbitant cost of the buildings constructed under his watch as Makati mayor. The probe is headed by Binay’s former party mate, Sen. Aquilino “Koko” Pimentel III, with whom he had a falling out.

But Nancy Binay said her father deserved courtesy, and the allegations against him should be brought to the proper forum.

She noted that when there are allegations against the President, he is not invited to Senate hearings, and the same should hold for the vice president, who is also not even required to attend budget hearings.

“If [Trillanes] has allegations of corruption or anything, I think the proper forum for him is to file an impeachment complaint against my father,” she told reporters.

Trillanes said the complainants and other witnesses will be asked first to the hearing on August 20, and then the vice president would be invited to subsequent hearings to rebut allegations.

The vice president is the “central figure” in the issue, not his son, the incumbent mayor, Trillanes said. He said the issue was imbued with public interest because it concerned the vice president, and a potential future president.

“Definitely he has to be invited. All evidence has to be presented, all sides have to be come out. They might say it’s just a demolition job,” Trillanes told reporters, adding that it could be called a demolition job only if it turned out there is  no evidence against Binay.

He said Binay would be issued an invitation, not a subpoena, and would be given the proper courtesy.

But Nancy Binay said the impending investigation was a demolition job, and questioned why Pimentel would lead it.

Trillanes’ resolution calling for the probe was referred to the Blue Ribbon Committee, but its chair, Sen. Teofisto Guingona, acceded to Pimentel’s request to chair the hearing.

Nancy said that if this would be allowed, then any Senator should be allowed to request to head any hearing of his or her choosing, such as the Malampaya fund scam.

She said she was also worried that this would “open a can of worms” and allow local disputes to be the subject of Senate investigations just because of the parties have allies in the Senate.

Pimentel was quick to say he would be fair and objective, and added that his history with Binay was not connected to his request to head the probe.

Pimentel and Binay used to belong to the PDP-Laban party, which was among the parties that made up the United Nationalist Alliance. The two had a falling out over UNA’s inclusion of Juan Miguel Zubiri on its senatorial slate in the last elections. Pimentel had accused Zubiri of cheating him out of a Senate seat in the 2007 elections. Binay eventually left the PDP-Laban and said he would form his own party.

Pimentel also said on Friday that he asked to chair the hearing because he has a proposal to allocate more funds to local governments. He said he was the chair of the oversight committee on the local government code.

“I have to make sure corruption has been minimized in the local government units,” he said.