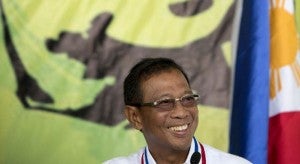 MANILA, Philippines — Vice President Jejomar Binay is not about to heed the latest Social Weather Station survey showing majority of Filipinos want him to face the Senate and respond to allegations of corruption against him.

Binay’s camp said Monday the vice president would rather go directly to the people to air his side, something that a spokesman said Binay has been doing in visits to the provinces during the past weeks.

On Tuesday night, however, Binay will appear in the media answer allegations he engaged in “systematic corruption” while he was mayor of Makati City and which the Department of Justice has said it will soon look into.

Binay was set to appear Tuesday night on ANC’s Beyond Politics program anchored by Lynda Jumilla, one of Binay’s spokesmen, Cavite Gov. Jonvic Remulla, said in a phone interview.

In a statement, Remulla insisted the vice president will not attend the “farcical proceedings” of the Senate blue ribbon subcommittee because its inquiry was “not in aid of legislation but in furtherance of political persecution.”

“It would be futile for the vice president to dignify such farcical proceedings and subject himself and his family to ridicule,” Remulla said.

He said Binay has already been prejudged by the Senate subcommittee and pointed to the way its members, Senate Majority Leader Alan Peter Cayetano and Sen. Antonio Trillanes IV, have been conducting the inquiry.

Remulla said the two senators accepted the “unfounded claims” of former Makati City Vice Mayor Ernesto Mercado and were coddling him and even enrolled him in the government’s Witness Protection Program.

“There are other venues where the vice president can address the baseless allegations and lies — venues where there is no other agenda except arriving at the truth,” Remulla said. “He is determined to bring the issues directly to the people, which he has been doing for the past weeks in visits to Mindanao, Zambales and Bataan.”