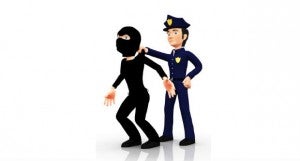 PARIS–A burglar who cracked open a bottle of champagne to celebrate his caper was surprised by French police while watching television and drinking bubbly in the house he had just robbed.

The owners of the house called police on Saturday when they returned to their home in the medieval town of Provins southeast of Paris, to find their shutters drawn, which they had left open.

Police discovered the tipsy robber “in front of the television with an open bottle of champagne”, a police source said, confirming local media reports.

“He was arrested with his booty”, which included a passport and money, the police source said.

The 42-year-old man appeared in a court in a southeastern suburb of Paris on Monday.