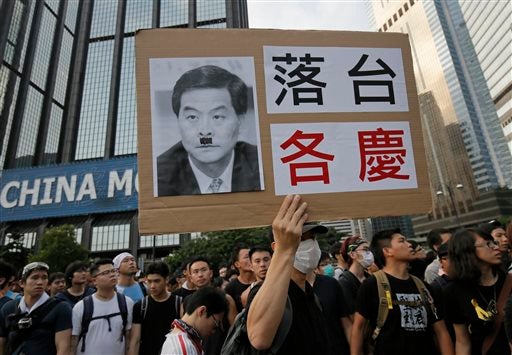 A student protester rests next to a defaced cut-out of Hong Kong’s Chief Executive Leung Chun-ying at one of their protest sites around the government headquarters, Tuesday, Sept. 30, 2014, in Hong Kong. Pro-democracy protesters in Hong Kong set a Wednesday deadline for the city’s unpopular Chief Executive Leung Chun-ying to meet their demands for genuine democracy and for him to step down as leader of Hong Kong, after spending another night blocking streets in an unprecedented show of civil disobedience. AP

The protesters, upset that Chief Executive Leung Chun-ying has refused to meet them, have threatened to expand their demonstrations unless he resigns and the Chinese leadership agrees to broader electoral reforms.

The ceremony was held to mark the anniversary of the founding of communist China in 1949, and after the hundreds of protesters yelled at Leung to step down, they then fell silent and turned their backs when the ceremony began.

Protest leaders were working on their response and it wasn’t clear what they planned to do next. Options include widening the protests, pushing for a labor strike and occupying a government building.

Chan Kin-man, one of the leaders of the Occupy Central movement, said the protests would continue as long as the Hong Kong government failed to give a satisfactory response to their demands for genuine democratic reforms for the territory’s first direct elections in 2017.

“I hope people will understand why the action keeps on escalating. It’s because the government is getting more and more closed without listening to Hong Kong people,” he told The Associated Press in an interview on the street. “If the government can give us a proper response in due course I think we can end the occupation immediately.”

Because it was a holiday, many families with children joined the thousands of protesters who thronged a six-lane highway in front of the government headquarters in the Admiralty area of Hong Kong. Many were students but there were also couples, retirees and foreigners who live in the city of 7 million.

They are posing the stiffest challenge to Beijing’s authority since China took control of the former British colony in 1997.

The protesters oppose Beijing’s decision last month that candidates for the territory’s top post in the 2017 elections must be approved by a committee of mostly pro-Beijing local elites similar to the one that picked Leung for the job. The protesters don’t want any such restrictions and see China as reneging on a promise that the chief executive will be chosen through “universal suffrage.”

Pierre Wong, a 36-year-old IT support technician, said it was his first day to join the protests that started last Friday.

“I hope there will be democratic reform, instead of using the current framework,” he said. “I came out today to support the movement. No student leaders or occupy leaders urged me to come out. I came out on my own.” 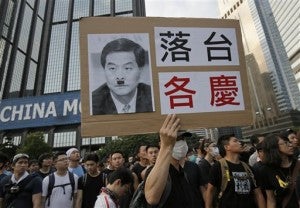 In his speech, Leung made no direct mention of the protesters, but he told voters it is better to agree to Beijing’s plans for nominating candidates and to hold an election, than to stick with the current system of having an Election Commission choose the chief executive.

As he spoke later to a group of dignitaries, pro-democracy lawmaker Leung Kwok-hung shouted for him to step down before he was bundled away by security. Local councilor Paul Zimmerman held up a yellow umbrella. The umbrella has become a symbol of the nonviolent civil disobedience movement because it has been used by protesters to deflect police pepper spray.

“I’m here today with the yellow umbrella because it stands against the shooting of tear gas at the children of Hong Kong. I think we have destroyed the values of Hong Kong earlier this weekend by shooting tear gas at children,” Zimmerman said.

Throughout the protest zone, volunteers were manning supply stations under canopies to protect against the hot sun, handing out water, crackers, umbrellas, rain coats and plastic wrap — which was also used to protect against the pepper spray and tear gas used by police to try to disperse crowds over the weekend.

China took control of Hong Kong in 1997 under an arrangement that guaranteed its 7 million people semi-autonomy, Western-style civil liberties and eventual democratic freedoms that are denied to Chinese living on the communist-ruled mainland.

China’s government has condemned the student-led protests as illegal, though so far it has not overtly intervened, leaving Hong Kong authorities to handle the crisis. Over the weekend, police fired tear gas and pepper spray in an attempt to disperse the protesters, but the demonstrations only spread.

Chinese President Xi Jinping, who has taken a hard line against any perceived threat to the Communist Party’s hold on power, vowed in a National Day speech to “steadfastly safeguard” Hong Kong’s prosperity and stability. The growing protests have attracted worldwide attention, with British Prime Minister David Cameron saying he planned to summon the Chinese ambassador to discuss the dispute, saying it is essential that Hong Kong’s people have a genuine right to choose their top leader.

“It is not for us to involve ourselves in every dot and comma of what the Chinese set out,” Cameron said in England. But he added: “I think it is a critical question. Real universal suffrage doesn’t just mean the act of voting; it means a proper choice.”