Protesters to HK boss: Quit or we occupy buildings 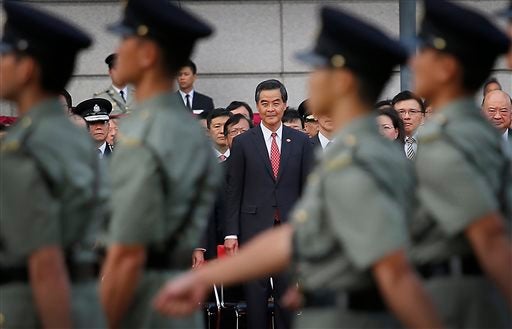 Hong Kong’s Chief Executive Leung Chun-ying, center, watches as military personnel march during a flag-raising ceremony on Wednesday, Oct. 1, 2014 in Hong Kong, as thousands of protesters watching from behind police barricades yelled at him to step down. AP

HONG KONG — Student leaders of pro-democracy protests in Hong Kong say that if the territory’s leader doesn’t resign by Thursday they will step up their actions, including occupying several important government buildings.

Lester Shum said at a news conference Wednesday that the student leaders would welcome an opportunity to speak with a Chinese central government official, but not Chief Executive Leung Chun-ying, insisting he must step down.

Shum is the vice secretary of the Hong Kong Federation of Students, which has played a key role in organizing the street protests that started Friday.

Thousands of residents have occupied several key areas of Hong Kong to press for greater electoral reforms after Beijing decided in August to screen candidates for the territory’s first direct election scheduled for 2017.