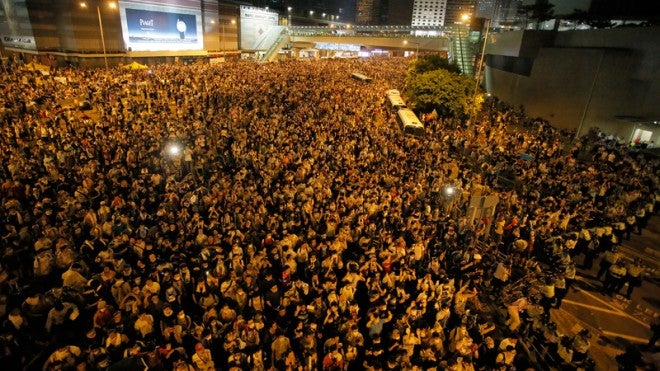 Protesters gather at a main road in the financial central district after riot police use tear gas against them after thousands of people blocked the road in Hong Kong, Sunday, Sept. 28, 2014. Hong Kong police used tear gas on Sunday and warned of further measures as they tried to clear thousands of pro-democracy protesters gathered outside government headquarters in a challenge to Beijing over its decision to restrict democratic reforms for the city. AP PHOTO/VINCENT YU

HONG KONG–Pro-democracy demonstrators in Hong Kong blocked a second major thoroughfare early Monday, this time across the harbor, after police had earlier used tear gas to disperse huge crowds in the city’s center.

Around three thousand demonstrators blocked a major road in the city’s congested Mongkok district in Kowloon, bringing traffic to a standstill and opening up a second significant flashpoint in the key financial hub.

On Sunday police repeatedly fired tear gas after tens of thousands of pro-democracy demonstrators brought parts of central Hong Kong to a standstill, a dramatic escalation of protests that have gripped the city for days.

There were chaotic scenes, with protesters screaming “Shame!” at police as they tried to shield themselves from the clouds of gas, said AFP reporters on the scene.

Several scuffles broke out between police in helmets, gas masks and riot gear and demonstrators angered by the tear gas, which was last used in Hong Kong in 2005.

“We are unarmed, just standing here, there was no warning for the gas,” Harry Hung told AFP.

“It was very cruel for the police to use such harsh violence on protesters who had been completely peaceful,” said one of the demonstrators, Cecily Lui, a 30-year-old clerk. “They were just sitting down on the road asking to speak with (Hong Kong leader) Leung Chun-ying to start a dialogue. Now, police have solved nothing and students are more resolved to stay.”

After using the tear gas, police issued a statement urging the protesters to “leave peacefully and orderly.”

“Otherwise police will use a higher level of force in order to restore public order and safeguard public safety,” the statement warned.

As the night wore on protesters were locked in a tense standoffs with police, some of whom had batons drawn and rubber bullet rifles slung over their shoulders.

“This is unbelievable. This is a peaceful protest and the police are the ones using violence,” said demonstrator Jade Wong. “The level of police violence here is just like mainland China, it was never like this before.”

Renewed rounds of tear gas were fired shortly before 10 p.m. (1400 GMT) forcing demonstrators to run from the choking clouds, an AFP reporter saw.

But it did little to stem the tide of demonstrators occupying more than 800 meters of a vital multi-lane highway usually filled with whizzing vehicles.

Officers had earlier used hand-held pepper spray on demonstrators who had spilt onto the highway after breaking through barricades set up to stop people joining the crowds camped outside Hong Kong’s government headquarters since Friday.

Traffic ground to a halt, with crowded commuter busses abandoned on the spot as demonstrators cheered and embraced each other in the middle of the road.

China, which stations a military garrison in Hong Kong, said it was confident the city’s administration could handle the protest.

Beijing “firmly opposes all illegal activities that could undermine rule of law and jeopardize ‘social tranquility’ and it offers its strong backing” to the Hong Kong government, a spokesman for China’s Hong Kong and Macau affairs office was quoted by the Xinhua news agency as saying.

Last month Beijing said that it would allow elections for Hong Kong’s leader in 2017, but would insist on vetting the candidates–something demonstrators have decried as “fake democracy.”

Students have boycotted classes in the past week, with protesters also mobbing the city leader’s residence and storming into the complex housing government headquarters.

Prominent pro-democracy group Occupy Central threw its weight behind the protests on Sunday, saying they were bringing forward a mass civil disobedience campaign that had been due to start on October 1.

The group had sparked months of heated debate in the city of seven million over its plan to bring Hong Kong’s financial district to a standstill with a mass sit-in. On Sunday they appeared to have come close to reaching that goal.

He said his government would hold more public consultations on the planned political changes–a move already scheduled before the protests.

The demonstrations—which Beijing called “illegal”—were a rare scene of disorder in the Asian financial hub, and highlighted authorities’ inability to get a grip on the public discontent over Beijing’s tightening grip on the city. The protesters reject Beijing’s recent decision to restrict voting reforms for the first-ever election to choose Hong Kong’s leader, promised for 2017.

Earlier Sunday, thousands of protesters who tried to join the sit-in breached a police cordon, spilling out onto a busy highway and causing traffic to come to a standstill.

Police officers in a buffer zone manned barricades and doused the protesters with pepper spray carried in backpacks. The demonstrators, who tried at one point to rip apart metal barricades, carried umbrellas to deflect the spray by the police, who were wearing helmets and respirators.

‘The world needs to know’

Ryan Chung, a 19-year old student watching events unfold, said: “We have the right to stay here and to protest. The world needs to know what is happening in Hong Kong. They need to know we want democracy but don’t have it.”

“From now on there will be more confrontation, possibly violent ones between citizens and police,” he told AFP.

But he added that with Beijing maintaining a hardline stance, it was difficult to see a way out of the standoff.

“The government needs to handle the students very carefully–any mishandling will spark larger acts of civil disobedience,” he said.

“We’re simply using our freedom of speech and they’re treating us like rioters,” he said.

Former colonial power Britain handed Hong Kong back to China in 1997 under a “one country, two systems” deal that guarantees liberties not seen on the mainland, including freedom of speech and the right to protest.

But tensions have been growing over fears that these freedoms are being eroded, as well as perceived political interference from Beijing.

Hong Kong “has changed to a new era so the people have to be awakened. It’s no longer the old Hong Kong,” said one protester, W.T. Chung, 46, who yelled at police officers after they used the tear gas.

Earlier, police said they had arrested 78 people since demonstrations started late Friday, though all but three were released.

Leung said Hong Kong’s government was “resolute in opposing the unlawful occupation” of the government offices or the financial district by Occupy Central.

“The police are determined to handle the situation appropriately in accordance with the law,” he said at a news conference.

“China’s central government firmly opposes illegal acts taking place in Hong Kong,” and fully supports the local government in handling the matter according to the law, the official Xinhua News Agency quoted the Hong Kong and Macau Affairs Office of the State Council as saying.

Protest organizers said police took away several pro-democracy legislators who were among the demonstrators.