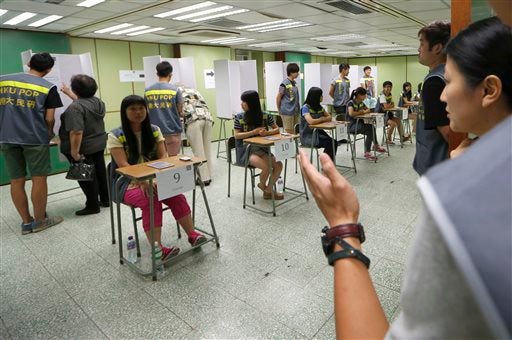 An assistance guides voters at a polling station for an unofficial referendum on democratic reform in Hong Kong Sunday, June 29, 2014. AP

HONG KONG — Hong Kong residents voted Sunday on the last day of an unofficial referendum on electoral reform that has angered Beijing, days before an expected major protest seeking greater democracy for the southern Chinese city.

More than 770,000 people in the semi-autonomous territory have voted in the 10-day poll on how Hong Kong’s next leader should be chosen. The ballot has been dismissed by Chinese state media as “an illegal farce.”

Tensions are running high in the former British colony before the anniversary on July 1 of its 1997 handover to China, a traditional day of protest.

Concerns are rising that Chinese influence over the self-ruled city is increasing, and that liberties it was guaranteed under the handover agreement are being eroded.

Pro-democracy advocates are incensed at plans for the election of Hong Kong’s next chief executive — who is currently appointed by a 1,200-strong pro-Beijing committee.

China has promised to let all Hong Kong residents vote for their next leader in 2017. But it says candidates must be approved by a nomination committee — upsetting democracy advocates, who say only pro-Beijing figures will be allowed to stand.

Organizers of Tuesday’s rally expect it to be the largest since the handover with upwards of 500,000 people expected, as frustration grows over Beijing’s tightening control over the city.

“Public sentiment has dropped to the lowest point since 2003. I believe more people will come out,” Johnson Yeung, one of the organisers, told AFP.

A record 500,000 people took part in a rally against a proposed national security bill in 2003, forcing the government to shelve it.

It was a key factor in the resignation two years later of the chief executive Tung Chee-hwa.

Earlier this month, China issued its first ever “white paper” policy document on Hong Kong, in what was widely seen as a warning to the city not to overstep the boundaries of its autonomy.

The referendum, partly online and partly at physical ballot boxes, offers voters three options on how the next chief executive should be chosen. Each would allow voters to propose candidates for the top job, and all are therefore considered unacceptable by China and the Hong Kong government.

A group known as Occupy Central has organized the referendum. The group threatens a mass sit-in in the business district later this year unless authorities come up with acceptable electoral reforms.

The response to the poll has far exceeded expectations despite major cyber attacks that affected electronic voting. Organizers blamed the cyber attacks on Beijing.

“Every Chinese should have the right to vote,” a 90-year-old voter, who only gave his surname as Fu, told AFP as he waited for a polling station to open in the Tsim Sha Tsui district Sunday morning.

“Although people can’t do it in China, we can do it in Hong Kong.”

Another voter, William Chu, said: “We should send a strong message to the government.”

Worries about Hong Kong’s liberties have grown this year following several attacks on journalists, including one that saw a former editor of a liberal newspaper, Kevin Lau, stabbed in broad daylight.

Yeung, the rally organizer, said it would be an opportunity for Hong Kong residents to defend their rights.

“Hong Kong people need to defend their own autonomy. We should not fear intimation from the Chinese Communist Party,” he said.