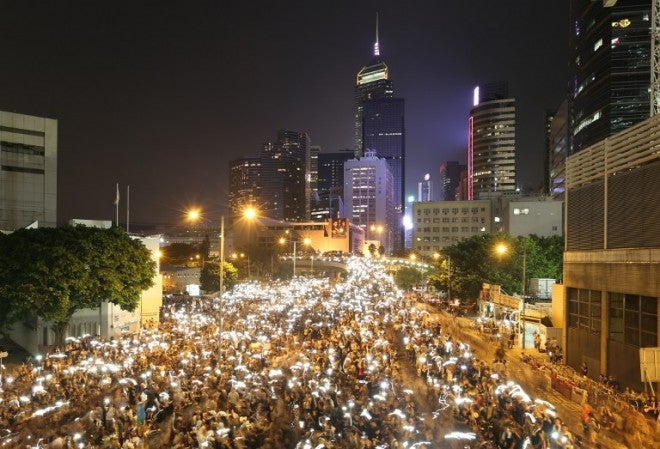 LET BEIJING SEE THE LIGHT Thousands of pro-democracy protesters flash their cell phones as they dig in for another night of confrontation with police in their campaign for free elections on Monday. Police tried to disperse them with batons and tear gas on Sunday, but failed to remove them from the Hong Kong government center in Admiralty district. AFP PHOTO /AARON TAM

HONG KONG–Tens of thousands of pro-democracy protesters turned parts of Hong Kong into a massive street party on Monday night, with the mood turning festive a day after riot police fired tear gas in ugly clashes.

The huge crowds defied government calls to go home after Sunday’s chaotic scenes, bringing key districts of the Asian financial hub to a standstill as they vowed to stay put until the Chinese government grants them free elections.

Sunday’s violence saw riot police fire clouds of tear gas as they struggled to control the protesters, in one of the biggest ever challenges to Beijing’s rule of the semi-autonomous city.

But the anger gave way to a festival atmosphere on Monday as riot police retreated, leaving huge masses of protesters in control of at least four major thoroughfares around the city.

As night fell, thousands of demonstrators who have blocked off a major highway turned on the torches on their mobile phones, turning the Admiralty business district into a sea of lights.

But although there were few police on the scene, some protesters feared a repeat of Sunday’s clashes, donning goggles and masks to protect themselves against tear gas.

“We can’t relax too much,” graphic designer Felix Kan told AFP. “This is still China–you never know what could happen.”

The demonstrators are furious over last month’s announcement by Beijing that while it will allow the city’s next leader to be elected in 2017, it will insist on vetting the candidates, with critics branding the move a “fake democracy.”

Public anger over rampant inequality is also at its highest in years in a city once renowned for its stability.

Cantonese pop music filled the air during the second day of what some are dubbing the “umbrella revolution,” as protesters have been using them as shields against tear gas and the scorching sun alike.

One British sympathizer won huge cheers as he set up a barbecue and began handing out hamburgers and sausages to the protesters.

“I saw everybody was just standing around and just eating bread and bananas and I thought, ‘These guys have been here for 24 hours now, and everybody needs cooked food,’” Daniel Shepherd, a finance broker by day, told AFP.

“Firing tear gas at students that are unarmed, I think, seems a bit excessive,” added the 32-year-old.

The crowds hoisted up a makeshift copy of the “goddess of democracy” statue that graced the 1989 protests in Beijing’s Tiananmen Square, while lamp posts were adorned with yellow ribbons–which, like the umbrella, have become a symbol of the movement.

But many Hong Kongers expressed frustration at the huge disruption the protests have caused, with the crowds blocking key junctions in the busy Causeway Bay and Mongkok shopping districts as well as the biggest protest site in Admiralty.

There was chaos on the transport network, shuttering many businesses, with schools in two central districts set to close for a second day on Tuesday.

By Monday night the throngs of protesters were stretching into the skyscraper-packed Central district, home to banking giants and the flagship stores of luxury brands, in another potential headache for the thinly stretched police.

Analysts say the protests put the Chinese government in an extremely difficult position.

Communist authorities are worried that dealing with the protests too softly could encourage wider protests for greater freedoms on the mainland–but a heavy-handed response could spark an international outcry.

“It has the potential to be such a major crisis,” said Christopher Hughes, a China expert at the London School of Economics.

He warned that authorities could well gamble that cracking down hard is a better option–and that Hong Kong could see a repeat of the violent crackdown on Tiananmen.

“If they did decide to send in the tanks, who could stop them?” he told AFP.

“They did it in 1989 and got away with it and they’re a lot more powerful now. There would be some negative impact, some business confidence, but how long will that last?”

Hong Kong stocks ended down 1.90 percent on Monday as investors fretted about the impact the ongoing disruption could have on a key regional market, while the United States urged Hong Kong’s leaders to “exercise restraint.”

Hong Kong’s police force defended the use of tear gas, with Assistant Commissioner Cheung Tak-keung saying officers had no other option when “police cordon lines were heavily charged by some protesters.”

But lawyers from the Hong Kong Bar Association condemned “excessive and disproportionate use of force” against crowds which it said were clearly predominantly peaceful.

The mass protests came after a week of increasingly tense student-led demonstrations that saw people mob the city’s leader and storm the central government complex.–Benjamin Haas