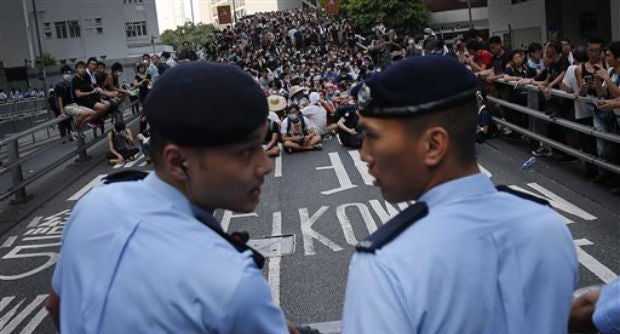 Pro-democracy protesters sit on a road as they face-off with local police, Monday, Sept. 29, 2014 in Hong Kong. AP

HONG KONG—Jubilant Hong Kong protesters on Tuesday refused to budge until Beijing agrees to free elections after tens of thousands turned the city’s downtown into a carnival, with the US leading calls for authorities to show restraint after crowds were pelted with tear gas.

As morning broke over China’s financial hub, tired but defiant demonstrators celebrated getting through the night without fresh confrontations with riot police.

They showed no signs of backing down, digging in for a third day of occupying major thoroughfares. Schools in affected areas were again closed and commuters faced disruption, with many bus routes suspended or rerouted and taxis scarce.

The protests have left Beijing grappling with one of the biggest ever challenges to its rule of the semi-autonomous city at a time when the Communist Party is cracking down hard on dissent on the mainland.

The demonstrations, the worst civil unrest Hong Kong has experienced since its 1997 handover from British rule, were sparked by Beijing’s decision last month to restrict who can stand for the city’s top post.

Hong Kongers will be able to vote for their next chief executive in 2017 elections but only two or three candidates vetted by a pro-Beijing committee will be allowed to stand— something demonstrators have labelled a “fake democracy” that shows Hong Kong cannot trust its mainland overseers.

‘We must keep fighting’

At the barricades Tuesday morning protester numbers dropped from their overnight highs as many took breaks to shower and rest. But some vowed to stay put. 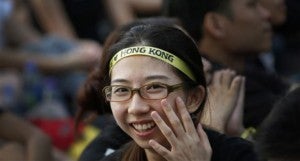 “We have to keep fighting for freedom and democracy because it has been gradually taken away from us,” 23-year-old Phoebe Wong told AFP.

“People won’t stop until we have a result we’re happy with. It feels like the government doesn’t care about us and isn’t listening,” she added.

In the central district of Admiralty—where many international businesses and the main protest site are located—Sara Chan was one of many lamenting the lack of movement from Hong Kong’s government.

“I am happy the police didn’t use tear gas last night, but we still haven’t heard anything constructive from the government,” she said.

Analysts say the chances of Beijing backing down is virtually non-existent, leaving a city once renowned for its stability plunged into an unknown future with democracy activists concerned the police could return at any moment.

“We believe an open society, with the highest possible degree of autonomy and governed by the rule of law, is essential for Hong Kong’s stability and prosperity,” White House spokesman Josh Earnest told reporters.

Communist authorities are worried that dealing with the protests too softly could encourage wider demands for greater freedoms on the mainland.

Many locals have expressed frustration at the huge disruption the protests have caused, with the crowds blocking key junctions in the busy Causeway Bay and Mongkok shopping districts as well as the biggest protest site in Admiralty.

But the protests have also prompted displays of solidarity. Some social workers and teachers also went on strike after the Hong Kong Confederation of Trade Unions and the Professional Teachers’ Union called for members to take action, the South China Morning Post reported.

Commentators say that still bigger crowds could turn out as the week progresses, with Wednesday and Thursday public holidays in Hong Kong.

Wednesday marks the 65th anniversary of the Communist Party’s seizure of power in Beijing—which is celebrated as National Day across China. But in Hong Kong, fireworks scheduled for Wednesday evening have already been cancelled.