How much do Aquino’s trips abroad cost? 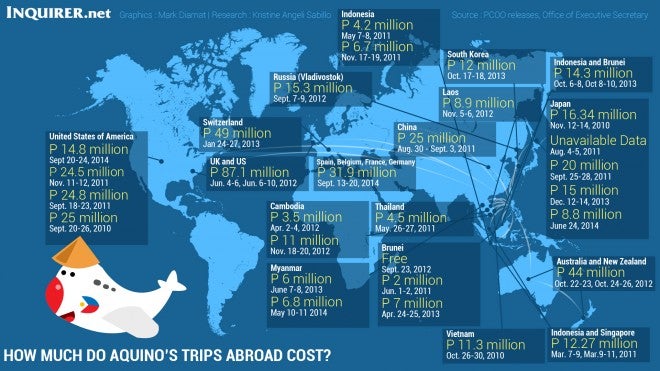 MANILA, Philippines – President Benigno Aquino III over the weekend embarked on his fifth trip to the United States, after spending eight days in Europe to the tune of P31.9 million.

Aquino’s latest trip will be the longest so far – eight days in Europe and four days in the United States.

Travel expenses of officials have long been a touchy subject in the Philippines where at least a quarter of the population is mired in poverty, according to government statistics.

Aquino’s trip to European countries Spain, Belgium, France and Germany last week, his first since taking office in 2010, cost the taxpayers an average of almost P4 million per day while his current trip to the US cost P14.8 million or P3.7 million per day.

The amounts are higher than the budget spent for visits to South East Asian countries, which ranges from P1 million to P3 million per day. However, it is also relatively small compared to Aquino’s trip to Davos, Switzerland in 2013 (P12.25 million per day) and his trip to the United Kingdom and the United States in 2012 (P12.44 million per day).

The UK and US trip, which lasted seven days from June 4 to 10, 2012, drew flak because of the P87.1 million worth of expenses, the biggest allotment for a trip abroad under the current administration, for Aquino and his delegation’s needs.

The amount allotted for each trip often covers “transportation, accommodation, equipment, and other requirements” of Aquino and his delegation, which numbers around 40 to 80 people. However, some of the amounts listed below do not include airfare. Other trips are also cheaper because some of the expenses were paid for by the host country.

Trips to Brunei, for example, were consistently cheaper. In 2012, the Sultan Hassanal Bolkiah shouldered the expenses of Aquino and his delegation so they may attend the wedding of his daughter.

In 2012, Brunei’s hospitality to Aquino made headlines after it lent 43 cars – an assortment of Mercedes Benz, Rolls Royce and Volvo — to the Philippine delegation.

Palace officials have argued that the cost of the trip is easily earned through foreign direct investments (FDI), though critics point out that the Philippines has the lowest FDI among the Asean founding member states.

Nevertheless, Aquino said he expects the country to receive additional FDI worth $2.38 billion as a product of his meetings with business and government officials in Europe.

The President’s trips revolve around meeting heads of states, businessmen and attending international summits, including that of the Association of Southeast Asian Nations (Asean).

His trip to Switzerland in 2013, which cost P49 million, was for the World Economic Forum. The annual meeting in Davos has long been notorious for its hefty price tag.

While Aquino earlier pointed out that his travel expenses are cheaper than that of former President Gloria Macapagal-Arroyo because of fewer trips and expenses, information from the Commission on Audit showed that Arroyo’s expenses during the first half of her term matched that of Aquino. 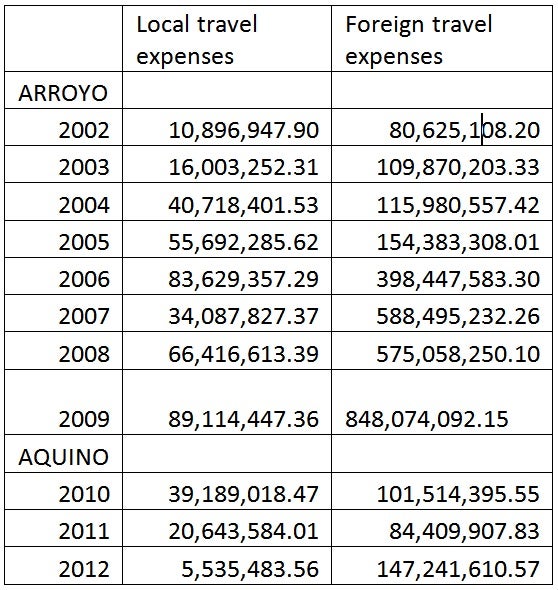 INQUIRER.net has yet to receive the data requested from the COA in order to compare the expenses of past administrations. Comparison of travel expenses of each President will be the subject of another article.

Below are some of the information gathered by INQUIRER.net on Aquino’s trips abroad: 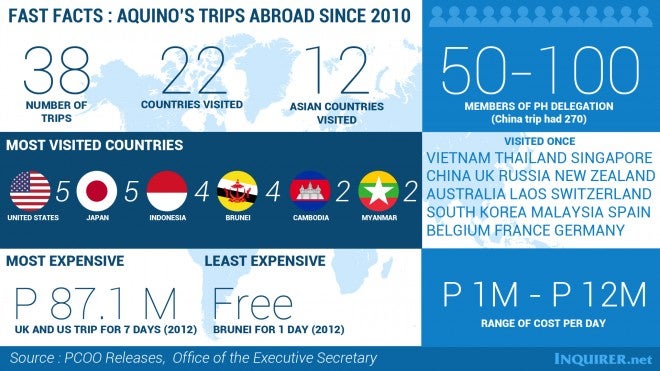 To give speech at the UN Climate Change Summit

Met with heads of state, European Union, over trade and other issues

READ: Aquino to push for code of conduct in Asean meet

Brunei: Did not spend (hosted by Sultan)

READ: Aquino in Vladivostok for Apec, to sell PH

READ: P87.1-M budget for Aquino’s UK, US business trip scandalous—Fr. Dizon and Aquino back with P100B in ‘done deals’

Attended the Asean Summit and 45th Anniversary of Asean

READ: Aquino off to Cambodia Monday for 20th Asean Summit

READ: President Aquino off to Hawaii today for Apec meet

READ: Aquino back from Japan with $1.4B in pledges

Indonesia: P4.2 million (54-member delegation) – does not include airfare

Attended annual gathering of the Asean

READ: Aquino flies to Japan with eye on fresh invesetments

READ: Vietnam can teach us to grow food

READ: Obama grants Aquino a 7-minute meet in NYC and PR deal for Aquino’s trip to US less than P45M – Palace