Up to $7B expected deals from visit
By: Norman Bordadora - @inquirerdotnet
Philippine Daily Inquirer / 12:08 AM August 31, 2011 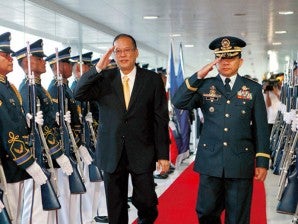 RED CARPET TO CHINA President Aquino troops the line during the send-off ceremony at the Ninoy Aquino International Airport on Tuesday night before boarding a Philippine Airlines special Flight PR001 for a five-day state visit to the People’s Republic of China. BEN HUR ARCAYAN/MALACAÑANG PHOTO BUREAU

BEIJING—Underlining the trade and investment slant of his state visit to China, President Benigno Aquino III arrived here with a 270-strong business delegation, including the Philippines’ top industry leaders.

It is the biggest business contingent of Mr. Aquino’s foreign trips.

John Gokongwei, Jr., founder and chair emeritus of JG Summit Holdings, Lucio Tan, founder and chair of the group of companies that bears his name, George Ty, chair of Metrobank, and Tony Tan Caktiong, chair of Jollibee Foods Corp. are among the most notable names with the delegation.

Many of the business leaders were with the President on the Philippine Airlines special flight PR001 that arrived here late Tuesday night from Manila.

“The primary objective of the President’s visit is to further strengthen bilateral ties between the Philippines and China, especially in the aspect of trade and commerce,” Executive Secretary Paquito Ochoa Jr. said on the day of Mr. Aquino’s departure.

Ochoa said the President would be meeting with Chinese businessmen and economic policy-makers. “(G)iven the potential of both our economies, we hope to close investment deals that will be beneficial for all those involved,” he added.

If government expectations from the trip are met, the P25 million allotted for the trip will be a well-spent amount.

The Philippines and China are expected to agree on a five-year economic development plan seeking to boost two-way trade six-fold, to about $60 billion.

The budget covers expenses for the special commercial flight, hotel accommodations, food, transportation, telecommunications, equipment requirements and items, during the three-leg state visit, according to Ochoa.

Assistant Foreign Secretary Cristina Ortega said at an earlier news briefing in Malacañang that the trip alone was expected to generate at least $1.5 billion in initial investments. Trade Undersecretary Cristino Panlilio said Tuesday night the visit could generate investments worth between $2 billion and $7 billion.

“We will work hard. I think it can be done,” Ortega said of the five-year development agreement’s expected yield for the country’s economy.

Most of it will be Chinese investments in manufacturing, railways, shipyards, mining and tourism as the Philippine economy continues to grow and the Aquino administration seeks funds to increase spending on social services to reduce poverty.

Because Mr. Aquino’s choice for Philippine ambassador to China, Domingo Lee, has not yet been confirmed by the Commission on Appointments, it will be the charge d’affaires at the Philippine Embassy, Alex Chua, who will represent the country here.

Chua said the meetings with Chinese economic policy-makers and business leaders would be an opportunity for Mr. Aquino and his economic team “to convey the message about our economy and our policies, and that we are back in business.”

China is lagging behind the United States and Japan as the Philippines’ third-largest trade partner.

Beijing’s attempts in the last decade to establish a more powerful economic and political presence in the Philippines floundered as Mr. Aquino’s predecessor, President Gloria Macapagal-Arroyo, staggered in a series of corruption scandals over allegedly overpriced projects involving Chinese companies.

The Aquino administration is reviewing a Chinese-sponsored railway project that was initially worth $503 million, but the cost reportedly ballooned to some $2 billion.

The President is scheduled to start his day on Wednesday with a meeting with officials of State Grid Corp. of China and National Grid Corp of the Philippines.

Afterward, he will meet with executives of China Trend and China Investment Corp. and Chinese petroleum officials. He will also meet with Chinese contractors before meeting Vice Premier Wang Qishan.

Together, Mr. Aquino and Wang will attend the Philippines-China Economic and Trade Forum.

“President Aquino and Vice Premier Wang Qishan, a very important leader in China, will be addressing the Philippines-China trade forum. Their messages to the 500 business leaders will highlight the commitment of both countries to stronger, more vigorous trade and economic cooperation, and their support for each other’s business sectors as they explore solid partnerships,” Chua said.

Following the meetings with business leaders, Mr. Aquino will formally be welcomed by Chinese President Hu Jintao at the Great Hall of the People.

A bilateral meeting will follow and a state banquet in Mr. Aquino’s honor to be hosted by Hu.

On Thursday morning, he is scheduled to visit the Great Wall.

Mr. Aquino is also scheduled to make stops in Shanghai and Xiamen.

In Shanghai, Mr. Aquino will meet with local officials and major business groups and sign trade agreements. He will also meet with the Filipino community there.

In Xiamen, he will visit Hongjian Village in Fujian province to view the araucaria tree planted in 1988 by his late mother, former President Corazon Aquino.

“The President will be planting a tree in the ancestral village where the Cojuangcos trace their roots,” said deputy presidential spokesperson Abigail Valte.

Mr. Aquino will interact with members of the Xu (Co) clan, which his mother traced more than two decades ago as her ancestral roots.