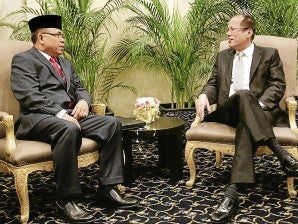 UNANNOUNCED, UNPRECEDENTED, UNCANNY President Aquino and Moro Islamic Liberation Front chair Murad Ebrahim agree to speed up peace talks during a landmark meeting in a hotel near Narita airport in Tokyo late Thursday. PHOTO COURTESY OF THE OFFICE OF THE PRESIDENTIAL ADVISER ON THE PEACE PROCESS

They discussed ways to push the peace process forward, said Teresita Quintos-Deles, the presidential peace adviser, who was with Mr. Aquino in Tokyo.

An official who spoke on condition of anonymity because he was not directly involved in the talks said the meeting was meant to give the peace talks “a shot in the arm” and show support from the “highest level.”

The President’s late mother, President Corazon Aquino, had met with the head of the main Muslim insurgency, Nur Misuari of the Moro National Liberation Front, in Sulu in 1986 to talk peace. The meeting paved the way for the resumption of peace talks that had collapsed during the Marcos dictatorship.

Mr. Aquino had sought the meeting, which had been in the works since late June, Marvic Leonen, the head of the government peace panel, told a press conference shortly after the President and his party arrived from Japan Friday.

Leonen said Mr. Aquino and Murad agreed to “fast-track” the negotiations and that the implementation of any agreement has to happen during the term of Mr. Aquino, who has made the resolution of the Muslim and communist insurgencies a high priority of his administration.

“The meeting was cordial but consisted of a frank and candid exchange of their views about the frames of the continuing peace talks and some possible approaches that the parties can take to bring about a peaceful settlement,” Leonen said.

Leonen refused to give details of the meeting as doing so would be like negotiating before the public in the media. He said, however, that the meeting did not supplant formal negotiations.

“There was no secret deal made at the meeting,” he stressed.

“They are no longer a secessionist group because their proposal does not include independence anymore. They are not asking to be a separate state. And therefore the implications that you are probably imagining, pardon me, are no longer there,” Leonen said.

He said there was “no international law or domestic law implication of the government meeting with a group that it wants seriously to have peace with.”

Anywhere in the world

“Besides, in the history of the entire world, heads of states do go on vacation in other countries. And they do unofficial visits. And that is not considered an acknowledgement of anything. The President took an unofficial trip to Japan and met with a Filipino there, a group of Filipinos there,” he added.

Asked why the meeting had to be in Japan, Leonen said: “The President will meet any Filipino anywhere in the world, in the planet, especially if he is serious enough to talk about an agenda, which is important to the country.”

He said Japan was chosen for security reasons and because it is the closest member of the International Contact Group, a grouping of nations that is attempting to promote trust between the two sides. The other members are Turkey, Saudi Arabia and Britain.

Leonen said Mr. Aquino arrived in Tokyo at 6 p.m. on Thursday night and the meeting started at 8:30 p.m. He left Tokyo for home at 10 a.m. Friday.

The trip was left out of the Palace media advisory of the President’s schedule for Thursday. Its advisory that day only included “private meetings” with the Office of the Presidential Adviser on the Peace Process, and the budget and management and finance departments.

The media was also advised of a “staff meeting” at 4 p.m.

Murad was joined by some members of the rebel group’s central committee, members of its negotiating panel and some “base commanders.”

“I think the President may have been ill-advised to meet personally as he (Murad) is not even his counterpart. And it might not be a good tactic in the negotiations,” he said.

He said Deles should “protect the President from such things.”

“She should just do her job and give her President deniability with respect to this early stage of the negotiations,” Escudero said.

Lagman questioned the urgency or necessity of having the President himself meet with Murad.

“Can’t the President send an emissary instead of he himself going?  There is more than meets the eye in the President’s excursion. He has much explaining to do.  Such as what has he achieved, what are the commitments?” said Lagman.

But House Majority Leader Neptali Gonzales II said: “If it will lead to real and lasting peace, I fully support P-Noy.”

Senator Francis Pangilinan welcomed the move as “an out-of-the-box solution” that showed the President was willing to step out of his comfort zone to ensure that peace is achieved.

A diplomat who asked not to be named said what the President did was “an act of treason.”

“A President is not supposed to go on secret missions. A head of state can never be the equal of a rebel leader, but he probably does not know that. He should be meeting with someone on his level,” the diplomat said.

She said the Department of Foreign Affairs was left completely out of the loop.

“I hear that the peace panel was the one that recommended it. What was their agenda? Did they just shake hands? A goodwill [meeting]?” she said. With reports from Gil C. Cabacungan Jr., Christian Esguerra and Jerome Aning and AP, AFP, Reuters