Aquino back with P100B in ‘done deals’ 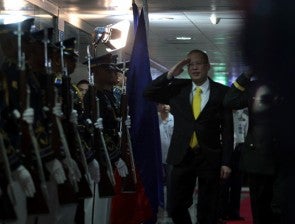 Saying that his weeklong trip did not go to waste, President Benigno Aquino on Sunday returned home bringing with him $2.5 billion, or P100 billion, in British and American investments in the country.

The President arrived shortly after 4 a.m. Sunday after being away for a week on a trip to London, which the Palace said cost P87.1 million, and to Washington, where he met with US President Barack Obama.

In a statement he read at the airport, Mr. Aquino said the investments would mean more jobs and food on the table for Filipinos. He thanked his delegation, which included representatives of big business and his Cabinet, for what he described as a successful trip.

“We were away for six and a half days, 42 hours of which were spent on the airplane. But you have seen that we have not put this trip to waste and that we took all opportunities to push the country to the path of prosperity and wider development,” he said.

Mr. Aquino said his meetings in London with executives of British companies Glencore, GazAsia, Royal Dutch Shell and Nestlé generated “not less than $1 billion” in investments clinched with Philippine Associated Smelting and Refining Corp. and Aboitiz Equity Ventures, among others.

In the United States, he met with executives of  Sithe Global, Denham Capital, GN Power and Underwriters Laboratories who vowed to pour into the country investments worth $1 billion.

“In sum, the amount of investments from the companies I’ve met with in Britain and America was not lower than $2.5 billion or P100 billion,” he said.

The President said his trip also resulted in deeper friendship with the United States and the United Kingdom.

In London, he said that in his meetings with them, British Prime Minister David Cameron and Prince Andrew appreciated the good outcome of his administration’s bid to get to the “right path” and praised his government’s efforts to have peace talks with state enemies as well as the high growth of the country’s economy.

Mr. Aquino said that Obama stressed the importance of the alliance between Washington and Manila and their desire to ensure free and peaceful navigation in the West Philippine Sea (South China Sea).

He mentioned US State Secretary Hillary Clinton’s support for a Coast Watch system that he said “will go very far in monitoring our coastal areas.”

The President said Clinton also announced the deployment of more Peace Corps volunteers to the country.

“But the good news does not end there. We are also beneficiary of a debt-for-nature swap; we will no longer pay off our debt (to the United States) amounting to $23 million just as long as this amount returned to us will go to the planting of new trees,” he said.

Mr. Aquino also announced that the country would soon receive an additional $30 million under the US Partnership for Growth program, which supports antipoverty projects.

Presidential Communications Secretary Ricky Carandang told reporters that the new investments were “done deals”—not pledges—and included power plants to be built in Luzon before the end of the year.