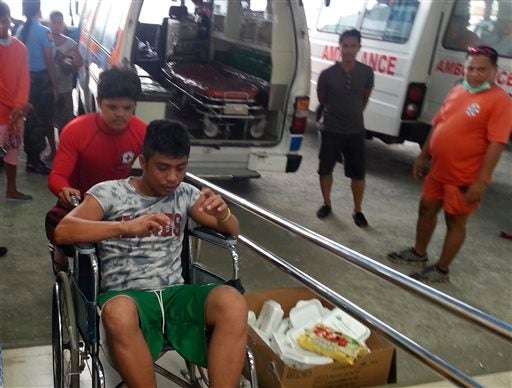 In this Saturday, Sept. 13, 2014 photo released by the Philippine National Red Cross Surigao Del Norte Chapter, a survivor from the ferry M/V Maharlika II that sank after encountering steering problems, is pushed on a wheelchair after arriving at the Lipata Port Terminal in Surigao city, central Philippines. AP

SURIGAO CITY, Philippines—The official death toll in Saturday’s sinking of the MV Maharlika 2 off the Surigao-Leyte channel climbed to eight as of 3:30 p.m. Monday after five more bodies were recovered by search-and-rescue teams.

One of the recovered bodies was identified as that of Betty Baje.

But authorities were still clueless as to the exact number of passengers on board the ill-fated ferry when it sank, relying instead on the accounts of survivors and their relatives in getting data crucial to the search-and-rescue operations.

More than two days after the ferry’s sinking, authorities still have to obtain a full account from the shipmaster, who submitted an official passenger manifest that did not reflect the actual number of persons on board.

This explains the varying numbers of persons on board the ill-fated ferry in media reports.

Capt. Joseph Coyme of the Philippine Coast Guard told reporters that the shipmaster, Juan Cayago, had yet to issue a full account of the circumstances surrounding the ferry’s sinking.

Roxas noted that there were other ships in the vicinity of the Maharlika 2 that did not capsize.

The Maharlika 2 reportedly encountered steering problems at 2 p.m. after it left the Lipata port at 11 a.m. Saturday for Liloan port in Southern Leyte. The trip takes about four hours.

Survivors said the skipper told the passengers and crew to abandon ship at around 5:30 p.m.

The only verbal statement obtained from Cayago so far, Coyme said, was his recollection of a “physical head count” being conducted prior to his order to abandon the ship that placed the total number of passengers at 116.

Still, the reported head count total was way above the 58 passengers declared on the ferry’s official manifest, which Cayago had signed.

A total of 113 persons had been rescued while eight were confirmed dead.

Coyme could not confirm whether the official manifest included the ferry’s crew of 32, the passengers of a Manila-bound PhilTranco bus, or the drivers of 13 cargo trucks, including their assistants.

Without any idea of the exact number of passengers, Manuel Coro, head of SCDRRMC, said they were forced to rely on the accounts of rescued passengers and the statements of relatives of passengers.

“We process all claims by relatives and all accounts of the rescued passengers, and based on this, we come up with the numbers that you’re seeing now,” Coro said, pointing to the white board prominently displayed at the Lipata port’s passenger lounge, which serves as the search-and-rescue command post.

But the husband and two-year-old granddaughter of 56-year-old Josie Saberon were not listed among those missing.–With reports from Jerry Esplanada, Julie M. Aurelio and Dona Z. Pazzibugan