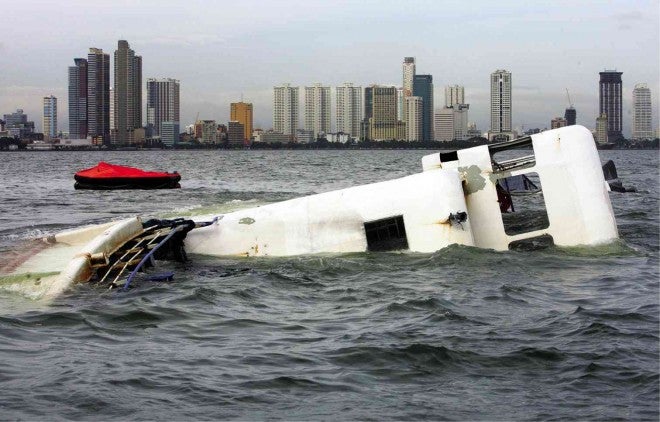 ‘LUIS’ DID THIS Typhoon “Luis” hit the northern portion of the country, but its powerful winds whipped places as far south as Manila, roiling Manila Bay and capsizing MV Super Shuttle Ro-Ro 7 from its moorings on Sunday night. Twelve crew members of the vessel were hurt. NIÑO JESUS ORBETA

The Philippine Coast Guard (PCG) reported on Monday that the ship was “half submerged in water” but all crewmen “were safe.”

Twelve of them were treated for “minor injuries, mostly skin lacerations and abrasions,” at the PCG medical facility in its headquarters in Port Area, Manila. Three other crew members who were unhurt were allowed to go home.

“Seven of them in a life raft were rescued by PCG personnel in the vicinity of the US Embassy compound. Seven others, holding on to floating debris, managed to swim toward the Quirino Grandstand area while the last one was rescued by the passing tugboat MT Energy Star,” Balilo said.

On learning that the Super Shuttle Ro-Ro 7 was taking on seawater and sinking, the PCG through its Vessel Traffic Management System (VTMS) “immediately alerted all vessels in the area to provide assistance.”

The VTMS also “coordinated in the search-and-rescue operation using a tugboat.”

The PCG said it would examine the vessel for the cause of the sinking. It was learned the ship had been anchored in the bay for some six months while undergoing repairs. The 13,540-gross ton vessel is owned and operated by Asian Marine Transport Inc. based in Cebu City.