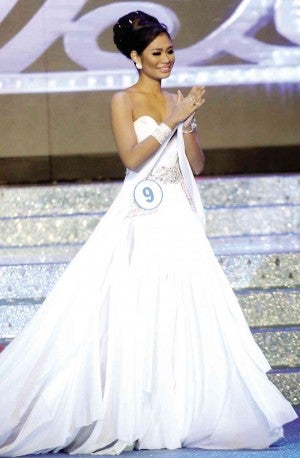 “Rest assured that I will do my best in fulfilling my responsibilities as Miss Quezon City. I will begin by first focusing my attention on the different charities in the city. It will be my way of giving back. I will also support the different projects of Mayor Herbert Bautista,” Bagaporo told the Inquirer shortly after the pageant held at the AFP Theater in Camp Aguinaldo on Saturday.

She said her victory was unexpected, even to her. “All of us are deserving of the crown. The girls and I worked together for three long months. We’re all like siblings. It was really an awesome experience for me. I already feel blessed just knowing that I was part of this event.”

Topics during the question-and-answer portion of the three-hour program included social services, tourism and the mayor’s priority projects. Asked what she could contribute to Quezon City, Bagaporo, a nursing graduate, said she would “help government officials make the city a better place to live in.”