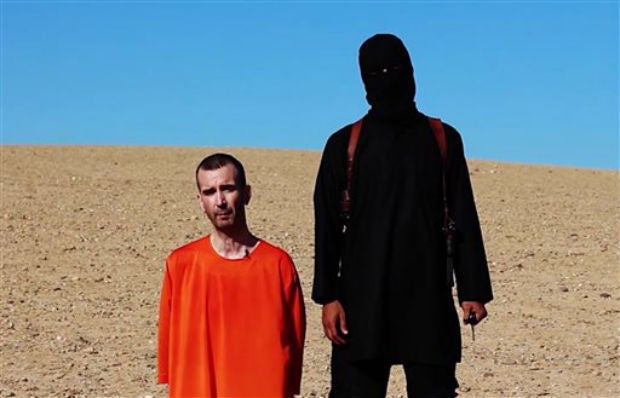 This image made from video posted on the Internet by Islamic State militants and provided by the SITE Intelligence Group, a U.S. terrorism watchdog, on Saturday, Sept. 13, 2014, purports to show British aid worker David Haines before he was beheaded. The video emerged hours after the family of Haines issued a public plea on Saturday urging his captors to contact them. AP

Cameron confirmed Haines’ death in a statement after the British Foreign Office had said earlier that it was “working urgently to verify the video.” Haines is the third Westerner beheaded in recent weeks by the Islamic State group, which has seized vast swaths of territory in Syria and Iraq.

“This is a despicable and appalling murder of an innocent aid worker. It is an act of pure evil,” Cameron said, adding that “my heart goes out to the family of David Haines who have shown extraordinary courage and fortitude throughout this ordeal.”

“We will do everything in our power to hunt down these murderers and ensure they face justice, however long it takes,” Cameron said.

Cameron returned to his residence at 10 Downing Street shortly after midnight and is expected to chair a meeting of the government’s emergency response committee early Sunday.

The video emerged a day after Haines’ family issued a public plea late Friday urging his captors to contact them.

The Foreign Office said it was offering Haines’ family “every support possible. They ask to be left alone at this time.”

At the end of the video showing the beheading of Sotloff, the Islamic State group threatened to kill Haines next and briefly showed him on camera.

“The United States stands shoulder to shoulder tonight with our close friend and ally in grief and resolve. We will work with the United Kingdom and a broad coalition of nations from the region and around the world to bring the perpetrators of this outrageous act to justice, and to degrade and destroy this threat to the people of our countries, the region and the world,” Obama said.

On Wednesday, Obama gave a nationally televised speech outlining a potential military campaign to “degrade and ultimately destroy” the Islamic State militants that is likely to include training and equipping moderate Syrian rebels and Iraqi forces, providing intelligence, and expanding airstrikes against extremists in Iraq and potentially into Syria. Britain was among the initial group of countries joining the U.S.-led coalition to root out the Islamic State extremists.

In the video showing Haines’ slaying, the group threatened to kill another British captive. Both British men were dressed in orange jumpsuits against an arid Syrian landscape, similar to that seen in the Foley and Sotloff videos.

The SITE Intelligence Group, a U.S. terrorism watchdog, reported the video, which was also posted online by users associated with the Islamic State group.

The video was entitled “A Message to the Allies of America.” Haines’ killer, who appeared to be the same masked man speaking with a British accent and brandishing a knife as in the previous videos, tells the British government that its alliance with the U.S. will only “accelerate your destruction” and will drag the British people into “another bloody and unwinnable war”.

In the video, according to a transcript provided by SITE, Haines says that he holds Cameron “entirely responsible for my execution” because Britain has “voluntarily entered into a coalition with the United States against the Islamic state.”

His killer says in the video that Haines was paying the price for Britain’s decision to supply weapons to Kurdish Peshmerga fighters, who are battling the Islamic State group in northern Iraq. He references U.S. airstrikes against Islamic State fighters near the Haditha Dam in western Iraq, which the U.S. began targeting on Sept. 7 — indicating that Haines’ killing took place sometime during the past week.

The British government had managed to keep Haines’ kidnapping secret out of concern for his safety until the Sotloff beheading video identified him as a captive and the next victim.

Late Friday, the family of Haines issued a public plea urging his captors to contact them.

In a short statement released through Britain’s Foreign and Commonwealth Office, the family said: “We are asking those holding David to make contact with us.”

Haines, 44, was abducted near a refugee camp in northern Syria in March 2013 while working for the French international aid agency ACTED which was helping thousands of Syrians displaced by the fighting between Syrian President Bashar Assad’s forces and rebel groups, including the Islamic State, seeking to oust him. ACTED said in a statement earlier this month that Haines had worked with as an international aid worker since 1999, helping victims of conflict in the Balkans, Africa and the Middle East. Before heading to Syria, ACTED said Haines had worked in 2012 as a “non-partisan unarmed civilian peace facilitator” in South Sudan.

Michael Rubin, a resident scholar at the conservative American Enterprise Institute, said the Islamic State group releases such videos because it has concluded that neither the American nor the European public has the stomach for a protracted conflict in which civilians are tortured and killed.

“Each video that’s released, of course, is a propaganda coup, if you will,” Rubin, a Pentagon official during the George W. Bush administration, told The Associated Press in an interview Saturday night.

If the slaying of Haines took place in the last few days, Rubin said, the timing suggests that U.S. and other forces have no idea where the extremists are keeping their captives and that, in turn, means a lack of intelligence about what goes on within the group itself.

Mike Haines said in a statement issued by the Foreign Office that his brother was devoted to humanitarian work.

“David was most alive and enthusiastic in his humanitarian roles,” Mike Haines said. “His joy and anticipation for the work he went to do in Syria is for myself and family the most important element of this whole sad affair. He was and is loved by all his family and will be missed terribly.”

British media have reported that Haines, who is married to a Croatian woman, was educated in Perth, Scotland, and spent 11 years serving in the British Royal Air Force before becoming an international aid worker. Britain’s Press Association said Haines had a teenage daughter in Scotland from a previous marriage and a 4-year-old daughter from his present marriage.