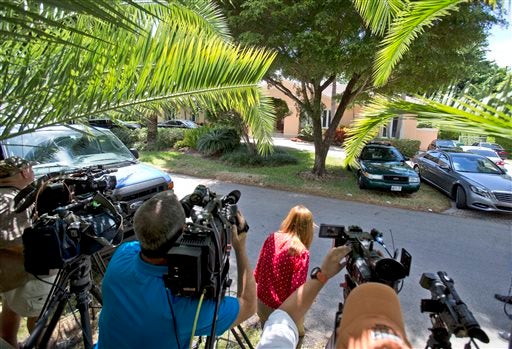 Television journalists stand across from the home of the family of journalist Steven Sotloff, Tuesday, Sept. 2, 2014 in Pinecrest, Fla. AP

The afternoon service at Temple Beth Am in Sotloff’s Florida hometown of Pinecrest will be open to the public, Rabbi Terry Bookman said. Sotloff attended the temple school as a child. His mother Shirley Sotloff teaches preschool there.

Sotloff, 31, went missing in August 2013 while writing about the Syrian civil war as a freelance journalist for several publications, including Time and Foreign Policy magazines.

He was also an Israeli citizen, a fact that was not widely known before his death — in part because Israel’s military censor apparently kept a lid on the story for his safety. His killers are not believed to have known about his background.

The Islamic State has beheaded two American journalists it held captive for what the militants called payback for more than 120 US airstrikes on its assets in northern Iraq since Aug. 8. Journalists James Foley and Steven Sotloff were two of what the State Department has described as “a few” Americans still being held hostage by the group. The Islamic State also had threatened to kill a British man it is holding hostage.

In a statement on Wednesday, a family spokesman said Sotloff dedicated his life to portraying the suffering of people in war zones, but was “no hero.”

Family spokesman Barak Barfi told reporters gathered outside the family’s suburban Miami home that Sotloff “tried to find good concealed in a world of darkness,” and to give voice to the weak and suffering in the Arab world. Barfi said Sotloff was “no war junkie,” but was drawn to the stories of the turbulent Middle East, and his family has pledged to “not allow our enemies to hold us hostage with the sole weapon they possess — fear.”