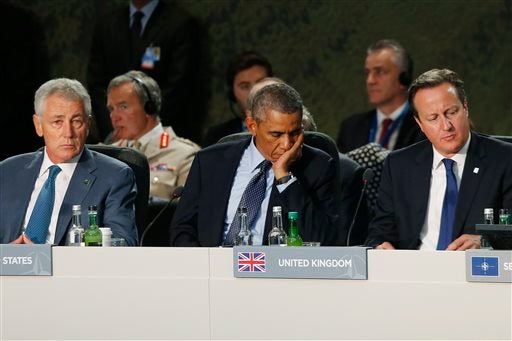 NEWPORT, Wales — America’s top diplomatic and defense leaders on Friday pressed a core coalition of 10 nations to summon the will to go after the Islamic State group in Iraq by using military force and squeezing the militants’ financial resources, and they insisted the western nations build a plan by the time the UN General Assembly meets in about two weeks.

In a private meeting with the foreign and defense ministers from the United Kingdom, France, Australia, Germany, Canada, Turkey, Italy, Poland and Denmark, Secretary of State John Kerry said leaders need a clear strategy and a solid idea about what each country will contribute to the fight. And, while noting that many won’t be willing to engage in military strikes, he said they can instead provide intelligence, equipment, ammunition or weapons.

“We have the technology, we have the know-how,” Kerry said. “What we need is obviously the willpower to make sure that we are steady and stay at this.”

Defense Secretary Chuck Hagel, sitting alongside Kerry, said the group forms a loose coalition that will be needed to face the insurgent challenge. He said the group can then be expanded.

The Friday morning meeting was a late addition to the NATO summit here and is part of a broader U.S. strategy to build a team of nations to fight the Islamic State militants who have taken control of the eastern third of Syria and large swaths of northern and western Iraq.

The foreign and defense ministers talked about how to tackle the Islamic State militant growth in Iraq, but Kerry said there are obviously “implications about Syria in this” and suggested they could discuss that later in the day.

“We very much hope that people will be as declarative as some of our friends around the table have been in order to be clear about what they’re willing to commit, because we must be able to have a plan together by the time we come to (the United Nations General Assembly),” said Kerry. “We need to have this coalesce.”

One key prong of the attack would be for the nations’ law enforcement and intelligence agencies to work together to go after the group’s financing — both in banks and more informal funding networks.

In a joint statement after the meeting, Kerry and Hagel said the group agreed to begin talking with a new Iraqi government about the potential for training and equipping the Iraqi security forces. They added that the group agreed to work to stem the Islamic State’s source of funding from illicit oil sales and hold accountable those who violate the trade prohibitions.

NATO Secretary General Anders Fogh Rasmussen said NATO has agreed to help coordinate assistance to Iraq that is coming from various nations. And he said that, if Iraq asks, NATO would consider putting together a mission to train and increase the capabilities of the Iraqi forces. NATO did training during the Iraq war.

NATO also agreed to increase cooperation among nations on sharing information about foreign fighters. A number of nations, including the U.S., have noted that radicalized citizens have been traveling to Syria and Iraq to fight, raising alarms that they could return to their home countries and launch attacks.

Denmark’s Foreign Minister Martin Lidegaard said after the meeting that so far Denmark hasn’t been asked to provide anything specific, but he added, “I cannot deny it will happen.”

“It is not only about a military effort, it is also about stopping the financial contributions to ISIS, to coordinate intelligence, it is about stopping foreign fighters, young people from our own societies,” Lidegaard said in a live interview on Danish television. “It is decisive that we get more countries along.”

The Friday meeting follows on the heels of a broad public plea by President Barack Obama and British Prime Minister David Cameron for NATO leaders to form a coalition to combat the extremists through military power, diplomatic pressure and economic penalties.

Kerry and Hagel laid out the goals in a joint editorial published as the two-day NATO meeting began.

US weighs airstrikes and humanitarian aid in Iraq