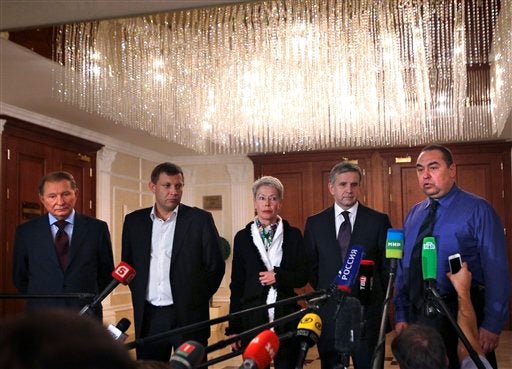 From right, Igor Plotnitsky, the leader of pro-Russian rebels in the Luhansk region, Russian Ambassador to Ukraine Mikhail Zurabov, Organization for Security and Cooperation in Europe Ambassador Heidi Tagliavini, Alexander Zakharchenko, the leader of pro-Russian rebels in Donetsk, and former Ukrainian president Leonid Kuchma meet with the media after talks on cease-fire in Ukraine in Minsk, Belarus, Friday, Sept. 5, 2014. AP

MINSK, Belarus — The Ukrainian president declared a cease-fire Friday to end nearly five months of fighting in the nation’s east after his representatives reached a deal with the Russian-backed rebels at peace talks in Minsk.

President Petro Poroshenko said he ordered government forces to stop hostilities at 1500 GMT (11 a.m. EDT) following a protocol signed by representatives of Ukraine, Russia, the rebels and the Organization for Security and Cooperation in Europe.

“Human life is of the highest value. And we need to do everything that is possible and impossible to stop bloodshed and end people’s suffering,” Poroshenko said in a statement.

Heidi Tagliavini of the OSCE told reporters the deal in the Belarusian capital focused on 12 separate points but she did not immediately spell them out before heading back into the talks. Poroshenko said a prisoner exchange would begin Saturday and international monitors would keep watch over the cease-fire.

With the cease-fire deal, Putin may hope to avert a new round of sanctions, which the European Union leaders ordered Friday to be prepared.

Since mid-April, Moscow-backed separatists have been fighting government troops in eastern Ukraine in a conflict the U.N. estimates has killed nearly 2,600 people.

“The cease-fire will allow us to save not only civilians lives, but also the lives of the people who took up arms in order to defend their land and ideals,” said Alexander Zakharchenko, the rebel leader from the Donetsk region.

But Igor Plotnitsky, leader of the separatist Luhansk region, told reporters “this doesn’t mean that our course for secession is over” — a statement that reflected the deep divisions which threaten to derail peace efforts.

Details of the peace plan are yet to be released. Putin has suggested earlier this week that rebels halt their offensive and Ukrainian government forces stop using combat aircraft and pull back so they can’t shell residential areas with artillery and rockets. Poroshenko, in his turn, has emphasized that Russia must withdraw its troops from Ukraine.

Moscow has denied reports by Ukraine, NATO and Western nations that it was backing the mutiny with weapons, supplies, and even with thousands of regular troops. But a NATO military officer told The Associated Press on Thursday that the ranks of Russian soldiers directly involved in the conflict have grown even past NATO’s earlier estimate of at least 1,000.

At a summit in Wales, NATO leaders approved plans Friday to create a rapid response force with a headquarters in Eastern Europe that could quickly mobilize if an alliance country in the region were to come under attack. Ukraine is not a NATO member, but the entire alliance has been alarmed by Russia’s actions in Ukraine, and Russia is under both U.S. and EU sanctions for its backing of the rebels.

In his statement, Poroshenko said he ordered the cease-fire following Putin’s call on the insurgents to halt fighting. He said he expects the OSCE to efficiently monitor the cease-fire.

“I count on this agreement, including the ceasing of fire and the freeing of hostages, to be precisely observed,” Poroshenko said.

German Chancellor Angela Merkel said Friday in Wales, where she was attending a NATO summit, that “if certain processes get under way, we are prepared to suspend sanctions.”

“We have to see whether this cease-fire is being applied. Do Russian troops withdraw, so far as they’re there? Are there buffer zones and things like that — a lot of things will have to be sorted out,” she said. “These sanctions certainly could be put into force — this is all in flux — but with the proviso that they can be suspended again if we see that this process really yields results.”

The rebel offensive in the southeast follows two weeks of gains that have turned the tide of the war against Ukrainian forces, who until recently had appeared close to crushing the five-month rebellion.

As late as Friday morning, Associated Press reporters heard heavy shelling north and east of the key southeastern port of Mariupol. The city of 500,000 lies on the Sea of Azov, between Russia to the east and the Crimean Peninsula to the west, which Russia annexed in March. The shelling appeared to indicate that rebels had partially surrounded the area.

The seizure of Mariupol would give the rebels a strong foothold on the Sea of Azov and raise the threat that they could carve out a land corridor between Russia and Crimea. If that happens, Ukraine would lose another huge chunk of its coast and access to the rich hydrocarbon resources the Sea of Azov is believed to hold. Ukraine ready lost about half its coastline, several major ports and untold billions in Black Sea mineral rights with Russia’s annexation of Crimea.

“Mariupol is a strategic point. If we lose it then we could lose the entire coastline, the whole south of Ukraine,” said Tatyana Chronovil, a Ukrainian activist at a mustering point for the volunteer Azov Battalion on the eastern edge of the city.

Col. Andriy Lysenko, a spokesman for Ukraine’s national security council in Kiev, said seven servicemen had been killed over the past day, bringing the Ukrainian forces’ death toll to 846.

US hits 7 Ukraine rebels with sanctions