US hits 7 Ukraine rebels with sanctions 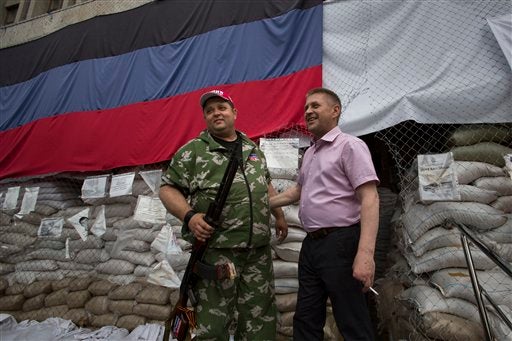 Vyacheslav Ponomarev, right, the self-proclaimed mayor of Slovyansk speaks to journalists in front of an administrative building seized by pro-Russian militants in Slovyansk, Ukraine, Thursday, May 29, 2014, with a huge Donetsk People’s Republic flag in the background. AP

WASHINGTON — The Obama administration imposed sanctions Friday on several pro-Russian separatist leaders in Ukraine, including self-proclaimed rebel mayors, governors and commanders in chief of cities under siege, for refusing to cede to the central government in Kiev. The sanctions came as U.S. officials renewed accusations that Russia is providing the separatists with tanks and heavy weaponry and as Ukraine’s president announced a unilateral ceasefire that Washington urged Moscow to support.

The penalties on seven separatists were intended as a signal that the U.S. will continue to punish those it holds responsible for instability in Ukraine and that the West was still prepared to slap tougher sanctions on Russia’s economic sectors to punish it for stoking unrest in Ukraine should Moscow not take steps to de-escalate the crisis, the officials said.

The White House and State Department welcomed Ukrainian President Petro Poroshenko’s cease-ire announcement even as they denounced Russia for supplying separatists with military gear. White House spokesman Josh Earnest called reports of a new Russian military buildup near the Ukraine border “troubling” and dismissed explanations from the Kremlin that the movement of security forces is related to border security.

“We will not accept any use of Russian military forces, under any pretext, in eastern Ukraine,” Earnest said. He also slammed Russian officials for making what he said were false claims about the Ukrainian government being responsible for poor human rights conditions in eastern Ukraine.

“We see these statements for what they are: an attempt to create pretext for further illegal Russia intervention in Ukraine,” he said. “In fact, responsibility for the deterioration in the human rights situation in Ukraine lies with the armed separatists who are targeting the population, and their backers in Russia.”

Washington last week accused Russia of sending three tanks and several rocket launchers to the separatists and, at the State Department on Friday, spokeswoman Jen Psaki said the U.S. believes Russia is preparing to send in more tanks and artillery from a site in southwest Russia.

“We have information that additional tanks have been prepared for departure from this same deployment site,” she said. “We also have information that Russia has accumulated artillery at a deployment site in southwest Russia, including a type of artillery utilized by Ukrainian forces but no longer in Russia’s active forces and believe Russia may soon provide this equipment to separatist fighters.”

Psaki would not say if the provision of the equipment to the separatists would be a trigger for additional sanctions.

Since Russia annexed Ukraine’s strategic Crimean peninsula in March, the U.S. has imposed sanctions against 71 individuals and entities, including in Russia, for their actions to destabilize Ukraine. The European Union has taken similar steps and next week, U.S. and EU officials will be discussing the possibility of wider sanctions at a series of meetings.

The sanctions imposed on Friday freeze any assets that the seven separatists have in the United States, and prohibit any American firms or businesses from dealing with them. It is a relatively limited slap against the separatists themselves but showed that the U.S. is ready to move forward with more if tensions ratchet back up.

In a statement, the Treasury Department said the sanctions penalize separatist leaders, including Vyacheslav Ponomaryov, who dubbed himself the “people’s mayor” of the eastern Ukraine city of Slovyansk after leading a group who overtook the local government there in early April; his colleague Igor Girkin, the self-described “commander in chief of the Donetsk People’s Republic” in the same town; and Valery Kaurov, who calls himself the “president of Novorossiya.”

Officials said Kaurov has asked Russian President Vladimir Putin to deploy troops to Novorossiya, which translates to New Russia and is a pro-Russian term for a region in southeast Ukraine.

Last month, in an apparent attempt to ease tensions, Putin had pulled back many of his estimated 40,000 Russian troops massed along the border. They appear to have returned over the last week — even as Putin and newly elected Ukraine President Petro Poroshenko discuss Poroshenko’s plan for a unilateral cease-fire and as Putin says he is resisting rebels’ calls for help.

US warns Russia of ‘additional consequences’ over Ukraine

Read Next
Polish Church apologizes for child sex abuse
EDITORS' PICK
Geek out at TOYCON 2022 powered by Smart Signature
Unemployment rate up to 6% in May
Bye bye Boris: UK PM Johnson bows out with regrets but no apologies
House energy committee chair Arroyo bats for cheap electricity
High inflation: Your P1 is now worth only 87 centavos
High-risk pregnancy: Reducing your risk is in your hands
MOST READ
Suspect in grisly killing of missing woman in Bulacan arrested
Rafael Nadal suffers ‘seven millimeter’ tear to abdomen–report
FDA probes popular Filipino noodle brand for ‘high level of ethylene oxide’
Kim Atienza’s daughter flaunts bikini body in response to critics of her ‘revealing photos’
Don't miss out on the latest news and information.